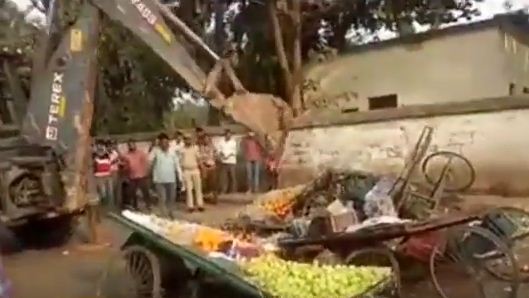 Ahmedabad: Police on Thursday arrested a Gujarat Congress leader from Patan district for allegedly circulating an old video of Odisha to claim poor vendors of Ahmedabad are being forcibly evicted by the BJP government ahead of US President Donald Trump’s visit, officials said.

The accused, Vinod Thakor, is chairman of the Patan district Congress’ social media cell, they said.

He was arrested by the Ahmedabad Crime Branch from Shankheshwar town of Patan district, said Assistant Commissioner of Police B V Gohil.

Trump and Prime Minister Narendra Modi are scheduled to jointly address a gathering at the newly built cricket stadium at Motera here on February 24 after taking part in a 22 km long road show in Ahmedabad.

On February 9, a sub-inspector of city Crime Branch came across a Facebook post of Thakor, in which, he had shared a video and claimed the “BJP government is ruining the lives of poor people because US President Trump is coming to Ahmedabad”.

In the video, a JCB machine can seen destroying handcarts, some even laden with vegetables.

“Despite knowing that the video was shot in Odisha, Thakor deliberately posted it on Facebook, claiming it to be of Gujarat. We had lodged an FIR against him for inciting public with such false claims ahead of Trump’s visit.

“Based on his Facebook ID and other technical details, we nabbed him from his residence in Shankheshwar,” said Gohil.

Thakor was booked under IPC sections 153 (provocation with intent to cause riot) and 504 (intentional insult with intent to provoke breach of the peace), he said.

Notably, when the video started doing the rounds on social media platforms a few days ago, the Ahmedabad Municipal Corporation had clarified the clip was shot in Odisha and had nothing to do with Trump’s visit to Ahmedabad.