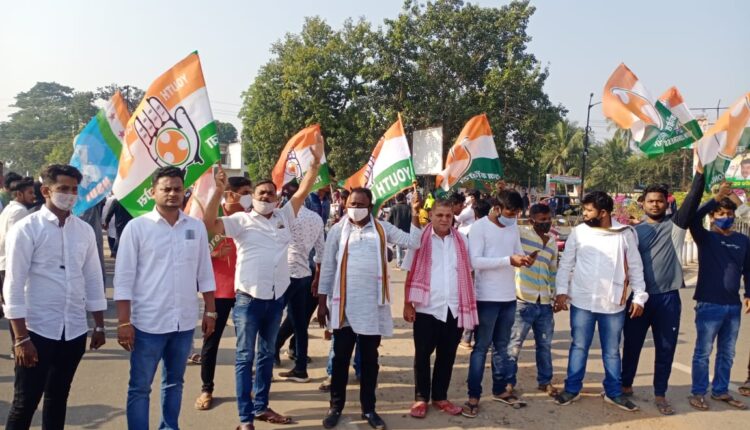 Bhubaneswar: Hundreds of Left and Congress activists in Odisha on Tuesday participated in the ‘Bharat Bandh’ called by the farmers against three farm laws by the Centre.

Normal life was affected across the state as eight political parties, including the Congress, Left parties and various farmer organisations and trade unions supported the Bharat Bandh.

Due to the protest, several banks, government offices and business establishments remained closed.

The protesters staged road blockade at several places across the state. The Congress workers also carried out bike rallies in Bhubaneswar.

“More than 60 per cent of people depend on agriculture activities in the country. The country would not progress if their economy is affected. The Modi government wants to benefit the corporates. We want to repeal the farm laws. People have extended full support to Bharat Bandh,” said Patnaik.

He also attacked the ruling Biju Janata Dal (BJD) saying both the Bharatiya Janata Party (BJP) and the regional party were supporting each other.

“What has the BJD done for the farmers in the last 21 years? Whatever the development is there in the last 72 years, it is because of the Congress,” he added.

The Left party activists staged rail roko at the railway station here and staged a road blockade at the Master Canteen Square.

“The three laws passed by the BJP government are black laws and against the interests of farmers. The government must repeal the Acts,” said CPI (M) leader Suresh Panigrahi.

Though the ruling BJD did not announce its support to Bandh, it said it is important to resolve the farmers’ issues and remove apprehensions.

“BJD has always been demanding the doubling of the Minimum Support Price as suggested by the Swaminathan Committee; and we will continue to do so for the benefit of our farmers. BJD has always stood for the interest of farmers,” said BJD MP Sasmit Patra.

“Prime Minister Narendra Modi has taken several steps, including hike of minimum support price on farm produce to double the income of farmers. But, the opposition parties are only opposing Modi for political reasons. They are shedding crocodile tears,” said Mohanty.