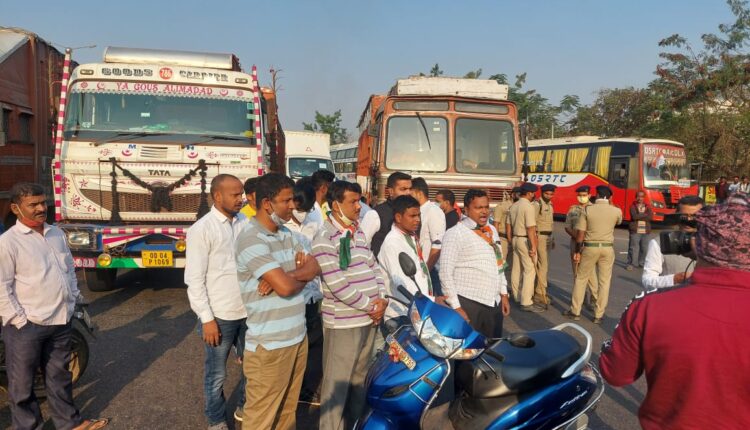 Bhubaneswar: The Congress is today observing a six-hour Odisha bandh from 7 am to 1 pm protesting the rising fuel prices.

Congress workers resorted to road blockade at various places across the state during the bandh. In Bhubaneswar, they blocked road on NH at Satsang Vihar Square, thereby disrupting vehicular movement. Hundreds of vehicles remained stranded on both sides of the road.

Emergency services including ambulance, vehicles carrying milk, media and examinees have been exempted from the purview of the bandh.

The Bus Owners’ Association has decided to suspend bus services across the state from 6 AM to 1 PM. All educational institutions including schools have been closed in view of the bandh.

All Odisha government employees working in Bhubaneswar have been advised by the Home Department to reach their respective offices by 9.30 am in view of the state-wide bandh.

“Officers and employees of Lok Seva Bhawan, Kharavela Bhawan, Rajiv Bhawan and Heads of Department Building etc. may be advised to reach office latest by 9.30 am to facilitate their smooth entry,” the Home Department said in a notification.

The front gates of the Lok Seva Bhawan will be closed at 10.15 am on 15.02.2021 and all the passage will be regulated through the rear gate. The connecting gate between the Red Building and Main Lok Seva Bhawan building will remain open, it said.

In pics: Odisha bandh in Bhubaneswar

Odisha Congress hits streets over fuel price hike ahead of…