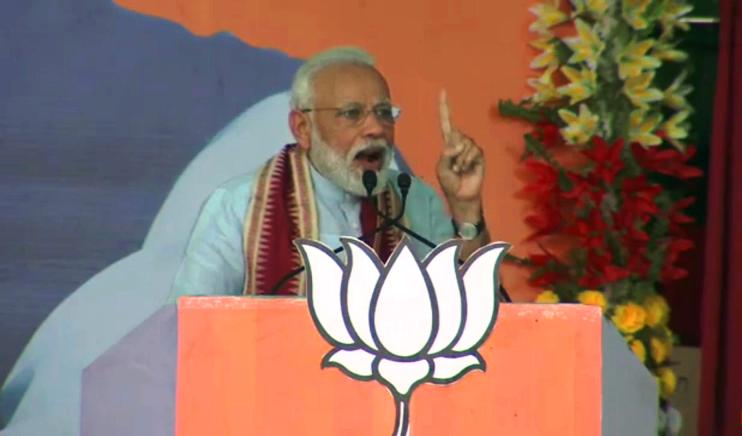 Kalahandi: It seems like Bharatiya Janata Party (BJP) has rolled up its sleeves for the elections battle to ensure a ‘double-engine’ Government in the Centre and in Odisha.

A day after BJP National President Amit Shah tried all possible ways to woo voters, it was the turn of Prime Minister Narendra Modi, who attended his second election campaign rally in the State today.

Without taking names, Modi fired the salvo at BJD and Congress alleging that both the parties have conspired to keep the poor of the State poor during their leadership. “The two parties have used the poor and farmers in the State as ‘vote bank’ and later betrayed them after coming to power. Large numbers of people are migrating to other states in search of work,” he stated.

Assuring that BJP will bring improvement in the lives of poor people in Odisha if voted to power, Modi appealed the people to cast their votes in favour of the saffron party in Bhubaneswar and in New Delhi to form a ‘double engine’ Government.

Besides, the PM also highlighted various achievements during his last five years of rule and said, “24 lakh houses in Odisha have access to electricity, 8 lakh people have pucca houses, 40 lakh poor households have got gas connections, 1.40 crore bank accounts have been opened and 50 lakh toilets constructed in the last five years.”

All of these have been achieved because of your votes only, he added.