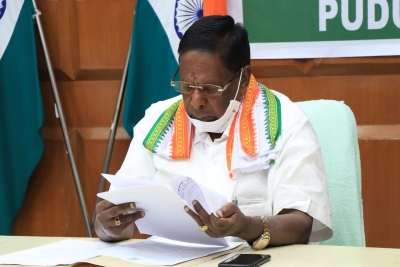 In the letter written on Monday, Narayanasamy called for inclusion of Union Territory in the ambit of the Central Finance Commission.

P’cherry: 2nd Congress govt to fall within a year after MP

He said, “During election campaigning for 2021 Assembly elections, both Shah and Prime Minister Narendra Modi had promised that the best would be provided to Puducherry. Union Finance Minister Nirmala Sitharaman had also promised to provide special category status to Puducherry.”

Narayanasamy said  the promises of bringing in developments in tourism, business, and education have not been met with the Government of the UT about to complete a year in office in May 2022.

He said that the Central Finance Commission did not provide additional grants to Puducherry even though it was entitled to the same.

The former Chief Minister further said, “The Government of the UT did not get even 5 per cent additional grants from the Centre, adding that it was pure discrimination.”

He also said, according to studies conducted while he was in office, the UT was entitled to a Rs 3,000 crore grant every year but was given only Rs 1,724 crore.

Narayanasamy further stressed strengthening of the cooperative sector in the UT and said that several people have lost jobs from cooperative spinning mills which were once the lifeline of Puducherry. He called upon the Government to reopen the mills as it would provide jobs to nearly 10,000 people.

Parag Agrawal to get $42 million if terminated as Twitter CEO