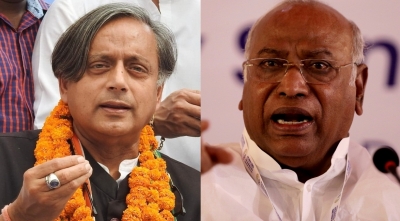 New Delhi: About 9,300 Congress delegates will vote on Monday to elect a new party President between the two contenders in the fray — Mallikarjun Kharge and Shashi Tharoor.

Voting will be conducted across all state and union territory offices from 10.00 a.m. to 4.00 p.m. About 67 booths have been set up, according to the party’s Central Election Authority (CEA).

Once the voting process ends, all the ballet boxes will be brought to the AICC headquarters in New Delhi.

Results will be declared as soon as counting of the votes end on Wednesday.

Rahul Gandhi, who is on his Bharat Jodo Yatra, will vote at a campsite in Karnataka’s Ballari, while outgoing interim president Sonia Gandhi and former Prime Minister Manmohan Singh will cast their ballots at the party headquarters.

CEA Chairman Madhusudan Mistry, said: “In AICC also there will be a booth, especially for all the senior leaders, working committee members and all those whose identity card is from a different state but are staying in Delhi. If they write to us that they want to vote in Delhi then we will make arrangements here as well, they can also vote here in AICC.”

He also assured the voters of the secrecy of the ballot.

Surya Grahan on October 25: Do’s and Don’ts to follow during solar eclipse