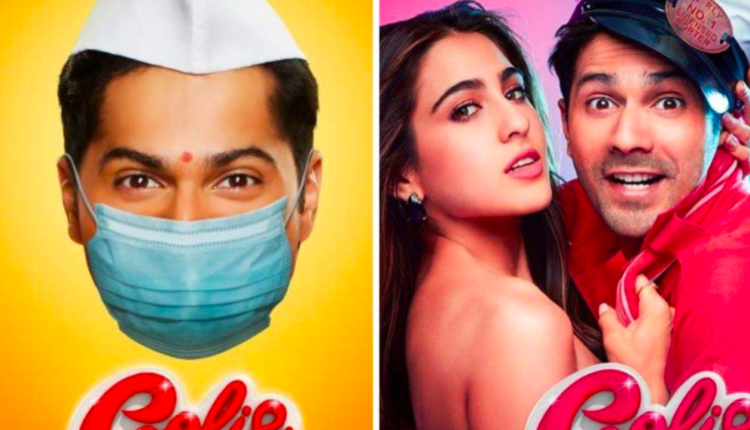 With the trailer release of Sara Ali Khan and Varun Dhawan starrer Coolie No. 1, there has been a massive amount of backlash from Twitterati calling out the obvious nepotism in casting.

To be honest, the trailer says absolutely nothing about the movie, and it’s only attractiveness is the fact that there are two good-looking people inexpensive clothes and colorful scenes. The acting, from what we can see from the trailer, looks over-the-top as expected, and not many are looking forward to watching the movie. Immediately after the release, memes started overflowing on Twitter, dragging the trailer and dissing the star cast. One Twitter user said “Let’s make it A HUGE DISASTER after SADAK 2 #SaraAliKhan #KolkataRoars4SSR #BoycottBollywood #VarunDhawan #CoolieNo1 #BoycottCoolieNo1 #BachchanPandey #KritiSanon #AkshayKumar.”

The original Coolie No.1 was released in 1983, and while some remakes of other movies have shown some amount of progress in society – such as Pati, Patni Aur Woh in which the wife played by Bhumi Pednekar has a job and is relatively more progressive as compared to the original – the new trailer seems to have no real “change” in character traits and storylines. For now, this is all we can tell from looking at the trailer, and hopefully, we’ll be pleasantly surprised when the movie releases.

However, there seems to be a certain vendetta against the film industry, heightened by Sushant Singh Rajput’s suicide and the drug allegations that followed combined with the conversation about nepotism in Bollywood. To be fair, judging someone and their work based on your own biases is unnecessary – as Sanjay Kapoor very rightly said in ‘The Fabulous Lives of Bollywood Wives’ that nepotism may get you your first or second or even the fifth movie. Still, if you want to last, you need to have that talent. Actors like Aaliya Bhatt, Ranbir Kapoor, and Ranveer Singh have been in the industry long enough to make a name for themselves outside of their family’s popularity and history. While the backlash for Coolie No.1 is understandable and reasonable, boycotting it out of vendetta is a plain juvenile (yet hilarious).

The movie is scheduled to release on 25th December 2020, and we’re sure Twitter is going to go berserk with memes and trolls. There are already multiple tweets that are hilarious; one user said, “#SaraAliKhan Me getting ready to dislike #CoolieNo1 trailer @Varun_dvn”

Another user used this to segue into #JusticeforSSR by saying that the industry has rejected him even after his death as the Australian Film Festival ‘AACTA’ has nominated Thappad, Chapaak, and Shubh Mangal Savdhan but rejected Dil Bechara. While this has nothing to do with the Coolie No.1 trailer, for some reason banning the movie was one of the hashtags in the tweet.

Besides, the response is not just harmful; there have been mixed reviews – some saying that the trailer is excellent and others disagree. A Twitter user said they loved the trailer and added that this would be the biggest OTT blockbuster and deserved a theatrical release.

Whatever the case, we won’t know how the movie is until it’s released, and as long as this remains harmless, we are happy to be entertained by the memes.