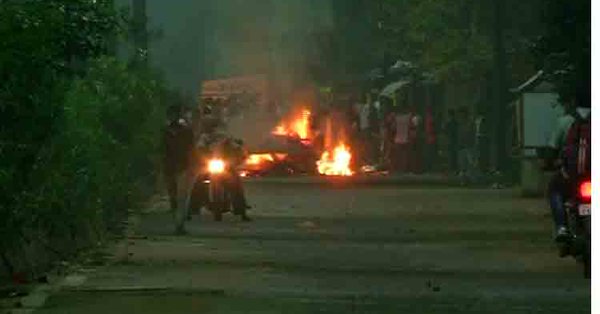 Bhubaneswar: At least four policemen, including Khandagiri police station Inspector-In-Charge Himanshu Bhusan Swain, were injured in a clash between two groups in a village on the outskirts of Odisha capital.

According to reports, a clash erupted between two groups from two villages – Raghunathnagar and Sarapantara – under Khandagiri police limits here which later turned violent.

As many as four houses, two bikes, a hotel and a PCR van were burnt to ashes as the members of two groups went on a rampage by hurling bombs and setting fire to whatever comes their way. Crude bombs, sharp weapons, sticks and bottles were hurled during the clash by both the groups, reports added.

Swain, who had rushed to the spot along with his colleagues to pacify the irate people, sustained injuries on his face and was admitted to AIIMS.

The reasons for the clash were not immediately known. Sources said the incident happened due to a past enmity between rival factions of two villages.

Following this, armed police personnel were deployed in the area, while some senior officials also rushed to the spot to take stock of the situation.

“The situation in the area is tense but well under control,” a police officer said. The police have conducted flag march in the area.

No one was arrested till filing of this report.

Plastic ban comes into force in six cities of Odisha