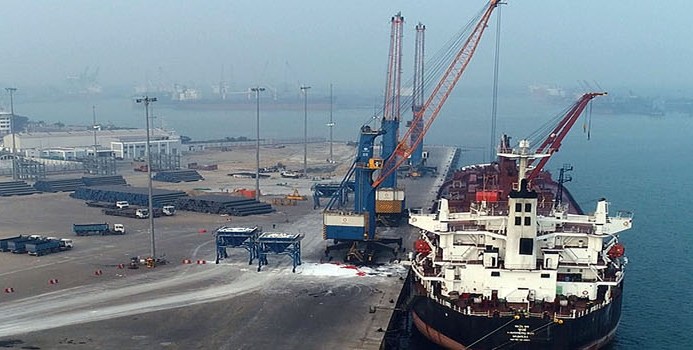 Bhubaneswar: The Odisha government has set up a special task force to monitor the situation in view of a novel coronavirus outbreak in China while the Paradip Port Trust has stopped the crew of seven cargo ships from disembarking, officials said on Friday.

Five people are currently under the scanner in the state as they have returned from China recently, Health and Family Welfare Secretary N B Dhal said. While one person has been admitted at the SCB  Medical College in Cuttack, four others were advised home isolation. Officials are keeping a watch on the health conditions of the four people in home isolation, he said.

Health department officials said the coastal state was vulnerable to the novel coronavirus (nCoV) only through two routes. The state has direct air connectivity with Kuala Lumpur, the capital of Malaysia, and another route is the Paradip Port, Dhal said.

Keeping in view the large number of ships coming to Paradip, the port authorities apprehend that crew members of the ships from China, Hong Kong, Japan and Singapore may have been exposed to nCoV. “Therefore, the crew members have been told to stay on the ships,” a senior port official said, adding that there was no restriction on loading and unloading of cargo ships coming from China and the other three other countries.

The official clarified that there was no restriction on crew members of ships from other countries and they can freely come down to the port township. “We have made elaborate screening of crew members from other countries at gate number 4 itself. Persons showing sign of cold, cough or running nose are put to screening,” said Dr Prahallad Panda, Chief Medical Officer of the Port Trust Hospital.

He said a special isolation ward has been set up at the hospital to provide immediate treatment if required. “There has been no such suspected case of nCoV so far,” Panda added.

Meanwhile, Odisha Chief Secretary A K Tripathy took stock of the situation on Saturday and alerted all chief district medical officers through video conferencing. He asked the officials to submit daily reports on the situation at the ground.

The state government has constituted a task force headed by the special secretary (Public Health) for proper management of the situation.

While a China-return MBBS student has been admitted at the SCB Medical College Hospital in Cuttack after he complained of cold and cough, the Health Department has sent blood and swab samples of total four people for confirmation to the National Institute of Virology in Pune.