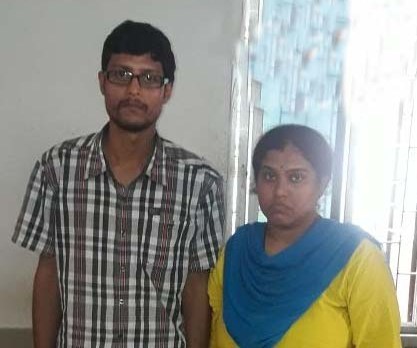 Bhubaneswar: A married couple was today arrested from Odisha capital for allegedly duping job seekers on the pretext of providing highly-paid jobs.

The duo has been identified as Sanjyoti Mohapatra (31) and Parthasarathi Mishra (35) of Badagada here.

According to police, the couple issued fake letter of appointment, letter of intent and gate pass to one Santosh Kumar Nayak in connection with a job at Indian Oil Corporation Limited (IOCL), Paradip as Graduate Engineer (Mechanical).

The complainant alleged that Sanjyoti Mohapatra took Rs 1, 35, 000 as part of the deal to provide employment.

Prima facie it appears that Sanjyoti Mohapatra and Parthasarathi Mishra have taken money from the complainant. The duo has been arrested and forwarded to court today. One laptop, a printer and two mobile phones have been seized from their possession, police said.

The accused also cheated Tanushree Pradhan and Sabyasachi Bugudi in the same manner to the tune of Rs 65, 000 and Rs 70, 000 respectively.

A case under section 420, 468, 471 of IPC was registered with Badagada police station against them.

Shocking! Yet another girl found pregnant in ashram school in Odisha