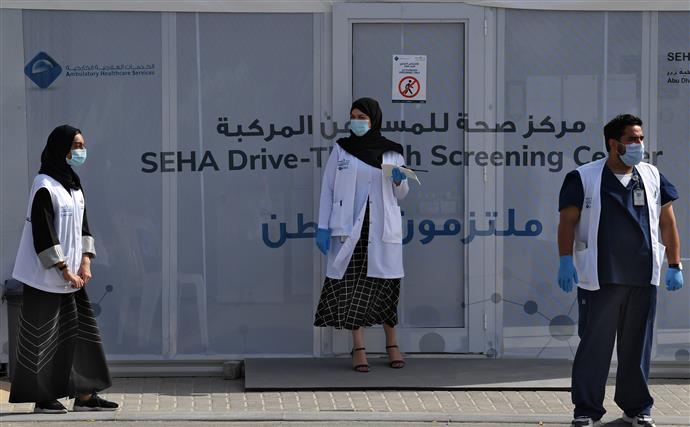 In United Arab Emirates (UAE), the highlight of the Covid-19 fightback story has been the exemplary response of the Government and its agencies.

UAE is a country  with a population of around 96 Lakhs. It comprises of seven Emirates – Abu Dhabi, Dubai, Sharjah, Ajman, Umm Al Quain, Ras Al Khaimah and Fujairah.

The main strategy of the UAE Government has been to test the maximum number of people, identify the patients and isolate them (for treatment) to prevent the spread of the infection, ensure social distancing and constantly disinfect and sterilize public spaces.

With more than 767,000 coronavirus tests conducted thus far in a population of 96 Lakhs, the UAE is among the top-3 countries in the world in terms of screening per capita. Health authorities have been able to detect around 5365 cases since the start of the outbreak and have helped 1034 patients to recover. Only 33 people have died so far from this disease and the death rate of around 0.6% is again among the lowest in the world.

One of the essential parts of the Covid-19 containment strategy was the establishment of 14 drive-through testing centers in all the seven Emirates. These testing facilities can screen hundreds of people daily. Samples are taken from the people while they are sitting in their own vehicles, without them having any direct contact with the healthcare workers. As per reports, up to 7100 people can be tested, each day at these drive-through testing facilities. Mass testing is important in identifying infected patients early, providing them with adequate care and preventing further infections. House to house testing in hotspots is also helping a lot in identifying carriers of the virus and isolating them. In a special move, a couple of days ago, UAE even announced home-testing of people of determination.

UAE is a unique country in the sense that out of its population of 96 Lakhs, around 88% people (84 Lakhs) are foreigners who work and live there. Hence, foreign residents outnumber the local citizens by a huge number. In a highly magnanimous and outstanding gesture, the UAE government is proving free treatment to all the people who are infected, whether they are citizens or migrants. This treatment is of very high quality.

To ensure social distancing and prevent large numbers of people gathering, Governments took may early steps. Dubai Government closed all schools from March 8 for a period of 4 weeks as a precautionary measure, although at that point in time, the number of Covid-19 cases were low. Again, on March 30 it was announced that all schools will be closed until the end of June (closure of the Academic Year). E-learning for students has been instituted and students are engaged in it everyday during normal school hours.

From March 29 till April 4 the UAE Government started a nationwide disinfection program during which a night curfew from 8 pm to 6 am was imposed across the country. Public transportation (buses, metro services etc)  and public facilities were suspended in the night.

However, intensifying its efforts, from the night of April 4, Dubai Government imposed a two-week lockdown of the city. Essential services and people engaged in such sectors were however exempted from this lockdown.

An interesting feature of this lockdown has been that any person who wants to venture out of his home is allowed to go out only to buy food stuffs, medicines etc but has to apply for a permit. This permit needs to be applied online. People venturing out without these permits are subjected to heavy fines.

Dubai has been at the cutting edge of automation and technology. News has come in that Emirates, the Dubai based airline, which is among the largest airlines in the world, has carried out on-site rapid Covid-19 testing for passengers. For the Dubai-Tunisia flight yesterday, which was a one-way repatriation flight, they tested all the passengers and results were made available within 10 minutes.

The UAE has started administering blood plasma therapy as a treatment for Covid-19 patients. One of the leading hospitals of the country gave convalescent plasma, the blood plasma collected from people who have recovered from the disease, to one of its patients infected with the virus and doctors are now awaiting the results of the treatment. While further investigation is needed to ascertain the efficacy of this treatment, the United States of America’s Food and Drug Administration (FDA) has recommended to health care providers the administration and study of convalescent plasma in fighting the disease.

UAE has been attempting to flatten the curve and reduce its infections. The next few days are very crucial in its strategy and will determine which way the disease is progressing. However, the morale of the people is high and the support and care provided by the Government is tremendous.

As far as the fight against the Corona virus in our home state Odisha is concerned, from what we hear from our relatives in Odisha and from what we read on various news websites, Odisha Government has been doing a pretty good job in handling the pandemic. Odisha was the first state in the country to announce a lockdown and also the first state to set up exclusive Covid-19 hospitals. These happened when there were very few cases in Odisha and hence speaks of good foresight on part of the State Government. The move to introduce a cash incentive of Rupees 15,000 for people to declare their foreign travel and home quarantine themselves was a very creative and innovative one.

I have personally experienced the good work being done by the Government. A friend of mine who went to Odisha from Dubai and registered for home quarantine was visited by the police enquiring about his health. He also used to get calls from the Health Department in Bhubaneswar, twice a day, monitoring his health. Such kind of personalized checks and follow up from the Government is heartwarming and sure instills confidence among the public about the Government’s efforts in containing the pandemic.

The writer is an Odisha-born professional based out of Dubai since 2012. He is the General Manager of a leading Indian Multinational Corporation.