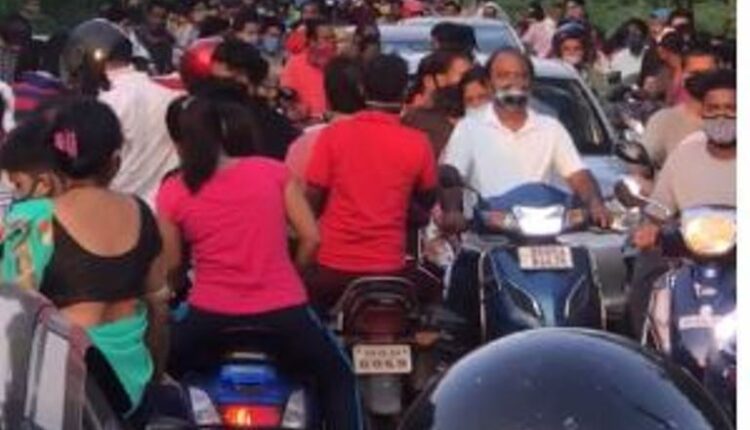 Cuttack/Sambalpur: The Naraj bridge over Mahanadi river on the outskirts of Cuttack city, which is normally less crowded in comparison to other bridges in the city, was today chock-a-block with people and vehicles. Unusually a big gathering of visitors flocked to the bridge to witness the large volume of water crossing under the bridge.

It is worth mentioning following incessant rain on the upstream of Mahanadi and in different parts of Odisha, the Hirakud Dam authorities have been releasing excess flood water for past four days causing the river to swell.

The visitors were seen parking their two wheelers and four wheelers on the Naraj bridge and took selfies through mobile phones. The road on the bridge was completely crammed with people making mockery of the COVID-19 guidelines.

The scene on the Naraj bridge was resembling no less than a fair.

Similar beeline of curious visitors was seen on the Ring Road in Sambalpur town to witness the flooded Mahanadi. People were spotted busy taking selfies while parking their vehicles on the road.

Later in the day, the Sambalpur district administration imposed Sec 144 from Nelson Mandela Chowk to Durgapali Chowk and Mahanadi New Bridge to prevent large gathering on the Mahanadi river bank.

Covid hospital shut in Odisha’s Sambalpur after decline in…