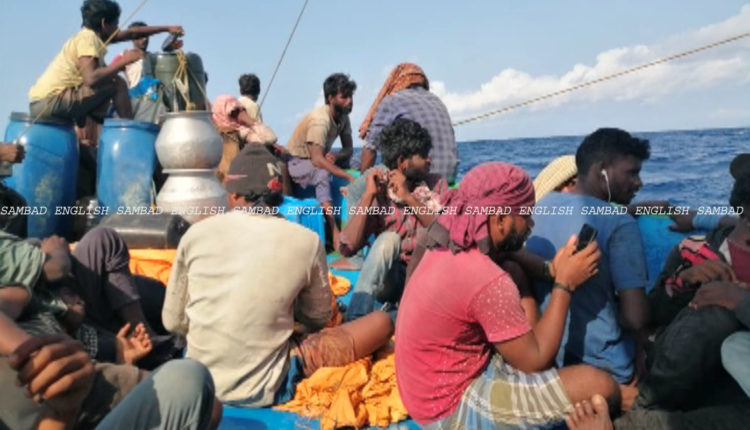 Berhampur: While lockdown due to COVID-19 pandemic has brought untold miseries to many, at least 38 persons boarded a fishing boat from Chennai to dodge lockdown restrictions and reached at their destination this evening at Patisunapur coast in Odisha’s Ganjam district.

The travelers on sea voyage embarked on the journey on April 20. Of them, nine are from neighbouring Andhra Pradesh.

The passengers were in touch with the district administration. They were supposed to arrive at the Patisunapur jetty at around 4 pm. After much difficulty, they arrived at the coast this evening after traveling over 1000 km in the Bay of Bengal.

Upon their arrival, the district administration officials collected the Aadhar card details and mobile number from them.

The officials on the spot said that 29 fishermen from Odisha are residents of Rangeilunda and Chikiti blocks.

“Their personal details are being registered owing which they will be sent to 14-day quarantine at a cyclone shelter. Health check-up will also be done,” Hara Prasad Bhoi, Chikiti Tahasildar said.

Five days ago, a similar incident came to fore on Monday when 27 people, including 10 from Odisha, hit the Donkuru coast, in Andhra Pradesh, around 35 km from Berhampur. They landed in the hands of a waiting district administration officials of both the states.

They had pooled together around Rs 1.8 lakh to buy a fishing boat for the risky journey. It took five days to reach their destination.

After the inter-state borders were sealed by the Odisha government to prevent influx of residents to the state, people are taking unusual routes to reach their homes. They are taking to these desperate measures as they are running out of money and provisions due to the lockdown.

Meanwhile, the state government yesterday launched an online portal for registration of individuals interested to travel to Odisha post the lifting of lockdown restrictions.