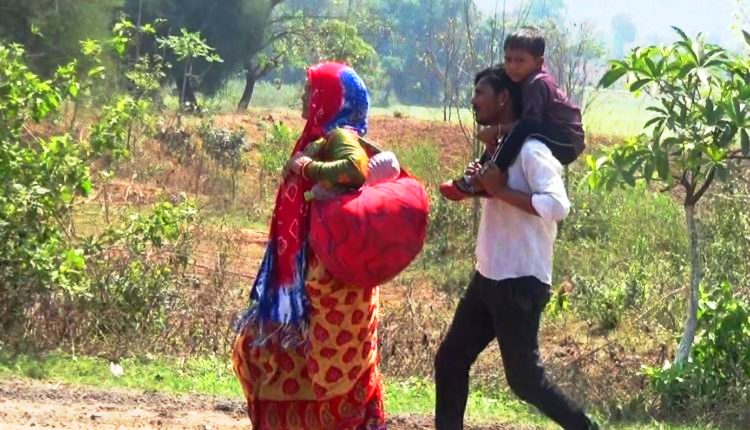 Bhubaneswar: Despite the Odisha Government’s efforts to help out people stranded in various parts of the state as well as outside, many migrant labourers are walking mile and miles back to their homes given uncertainties surrounding the COVID-19 pandemic.

In one such instance, a couple from Kanti of Uttar Pradesh, who had arrived in Rayagada district to eke out a living just a few days before announcement of the lockdown,  is now out on 1200- km journey to reach their village.

Raju Singh and his wife Dhanai,  whose occupation is street vending,  had reached Rayagada just three days before the lockdown and were selling ‘Rudraksha Mala’ by visiting door-to-door. Since all hotels and roadside eateries have been closed, the hapless couple is struggling to have food for themselves as well as for their child.

With uncertainty looms large over normalcy following COVID-19 crisis, the family is now heading  back to their native. Since not a single vehicle is plying on roads due to the lockdown, the couple started walking to reach their house carrying their son on shoulders. They expect to reach their house by walking 50-60 km everyday.

In a similar scene, three persons,including a woman were found  walking back to Digapahandi of Ganjam district from Bhubaneswar last night. The trio was working as labourers in the state capital and staying in Salia Sahi slum. The matter came to fore after a video of them purportedly taken by a commuter was uploaded on social media.

In the video, one of them named Anil Sethy can be seen saying that they decided to get back to their houses as  they have no money without work and are starving without food since last three days. However, after the video went viral, the Ganjam administration assured to track their movement and send a vehicle to pick and help them get back to their houses.

Sources said the people took a lift from a lorry from Tomando to Berhampur. After that, a police vehicle was sent to bring them back to their village.

In one more case, 17 labourers of Goilkera of Jharkhand were seen walking back to their village from Rengali of Sambalpur district. The labourers, who were engaged in construction of Jharsuguda-Sambalpur railway line,  are reportedly walking since March 25. Reportedly, when they reached Rourkela this morning, some locals offered them food after getting to know about their plight.