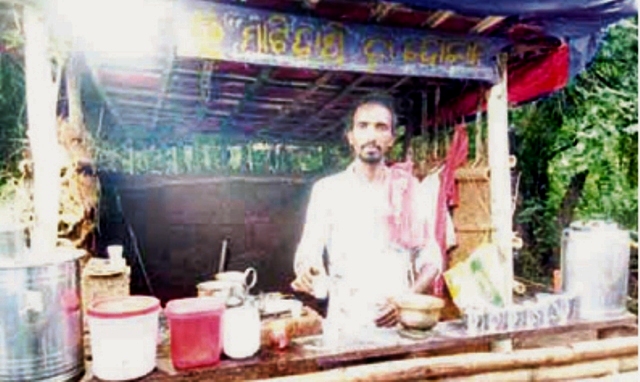 Berhampur: As the COVID-19 pandemic devastated lives of billions of Indians, a well-known choreographer of cine industry has turned a tea seller on a village street for livelihood in Odisha.

Sauling Padhiali of P Nuagaon village under Beguniapda block in Ganjam district who had started his career as the choreographer and earned fame in both Bollywood and Ollywood as well as Jollywood, has taken to selling tea to support his family these days amid lockdown due to the pandemic that has almost paralysed the entertainment industry.

Not only tea, the 29-year-old choreographer is also selling rabidi (a delicious condensed-milk-based dessert) at his shop by the roadside near his village.

It may sound very strange but the young man opted for alternative for livelihood during COVID-19.

Born in Gujarat, Sauling alias Guru was raised by her mother Budhi alone under poverty after he lost his father at an age of 10 years. Gradually, he was fascinated towards dance and he learnt the skill from a dance teacher belonged to Gujarat. By an age of only 14, he became an expert in dance. In the course of time, he stepped into film industry after coming in contact with Director Deepak Rajput of Ahmadabad.

In 2017, Guru choreographed for a track Hare Krishna Hare Rama in ‘Commando 2’, which was his first Bollywood film directed by Deven Bhojani. He takes the credit for his creative skills in choreography in two Odia films ‘Bindas’ and ‘Jaga Hatara Pagha’. He had also assisted the leading choreographer in the Odia film ‘Sundergarh Ra Salman Khan’.

Similarly, he is quite popular among artistes as the successful choreographer in a few Jatras and Odia albums.

However, Guru’s life turned drastically after the Central government imposed lockdown in the wake of COVID-19 outbreak. He returned to his native from Gujarat with empty hand. After struggling for five months, he opened a tea stall recently and started living life once again with new identity.

The choreographer-turned-tea seller gets profit of Rs 200-300 per day from his new work.

After coming to know about struggle of a talent, Beguniapada Block Supply Officer Sharat Behera has provided assistance under a government programme and assured him of taking steps to include him under food security scheme.

Guru, who lives with his mother, wife Maheswari and two sons at his village, said, “Everything is in the hands of God. I chose tea selling by roadside in village as I have no option left for survival.”