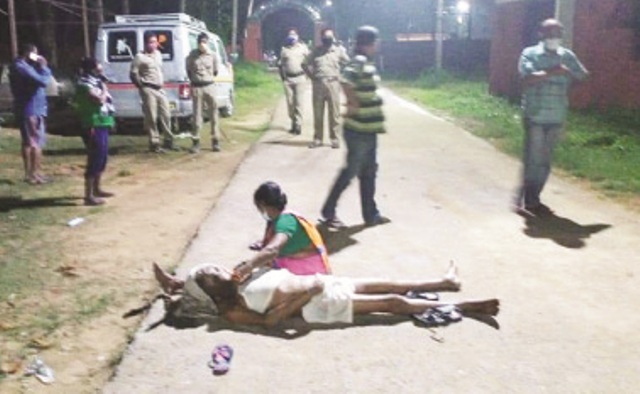 Puri: The body of an elderly man was left unattended for over four hours after he died of COVID-19 at Nimapara COVID Care Centre (CCC) in Puri district on Tuesday night. Moreover, family members of deceased Maheswar Swain (76) of Kajipatana alleged that the latter died due to negligence on the part of the hospital authorities.

As per sources, Maheswar was admitted to the CCC on Sunday after being tested positive for the virus. A day after the admission, his condition started deteriorating.  Seeing this, Maheswar’s family requested the hospital authorities to shift him to Puri and Bhubaneswar. However, the authorities allegedly did not make any arrangements for his shifting citing non-availability of bed.

On Tuesday afternoon, the elderly man’s condition further worsened and he complained of breathing difficulty. At around 7 PM, when the hospital staff were about to shift him to Puri in an ambulance, Maheswar succumbed to the disease.

Since he was already taken out of the hospital on a stretcher by the time, the hospital staff allegedly abandoned the body on the road leaving his helpless wife alone with her dead husband. Tension prevailed in the area after the body was left unattended for over two hours. Some irate locals also reportedly ransacked oxygen cylinder of the hospital and demanded action against those responsible  alleging that medical negligence led to death of the patient .

After almost four hours of his death, police and local Tehsildar reached the spot to pacify the mob. Later, the body was cremated as per the Government guidelines at around 11 PM.

On the other hand, the hospital authorities have refuted the allegation saying that the patient had comorbidities and there was no negligence in treatment meted out to the patient.