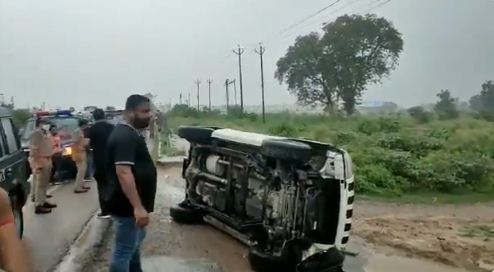 Lucknow: The UP STF has now claimed that a herd of cows and buffaloes suddenly appeared before the vehicle that was bringing gangster Vikas Dubey to Kanpur and this caused the accident, following which he tried to escape but was shot dead.

“The herd of cows, buffaloes suddenly came in front of the vehicle and the driver swerved the vehicle causing it to overturn,” said a statement released by the UP STF on Friday evening.

“Taking advantage of the situation, Vikas Dubey snatched the pistol of inspector Ramakant Pachauri and got out of the vehicle. He started running away. The second vehicle coming from behind and STF DSP Tej Pratap Singh and other STF personnel stopped and were told that Dubey had run away with the firearm. They chased the gangster and he started firing at them. Thee STF personnel tried to catch him alive but had to fire in self-defence,” the statement read.

The STF further said that they immediately took Vikas Dubey to the hospital for “first aid” but the doctors declared him dead after an examination.

Inspector Shivendra Singh and constable Vimal Yadav were injured in the firing by Dubey.

The STF officials refused to respond to questions like if Dubey was shot dead in wet mud, why were there no marks of mud on his clothes.

Moreover, as Dubey had a rod in his one leg which made him walk with a limp so how could he run so fast from the site of the accident, it was asked.

The STF also has no answer to the fact that vehicles of media persons were stopped 500 metres away from the site of the encounter even before the alleged accident took place.