‘Cradle of Hockey’ sees fans flocking from around the world

Bhubaneswar: The 2023 Men’s FIH Odisha Hockey World Cup Bhubaneswar-Rourkela has begun and the entire state of Odisha is alive and beaming with excitement. The host venues are the iconic Kalinga Stadium in Bhubaneswar and the ‘Mecca of Indian Hockey’, Birsa Munda International Hockey Stadium in Rourkela. Nearly every match in the World Cup has been played in front of a full house so far, across both the venues. This is no small feat considering, the Kalinga Stadium can seat over 15,000 people while the Birsa Munda International Hockey Stadium is the largest field hockey stadium in the world with a capacity exceeding 20,000. 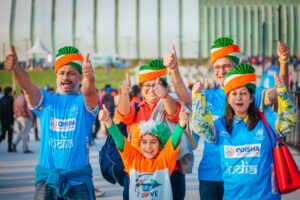 The streets are filled with fans from all over, often dressed in their team’s colors and brandishing flags and banners. The atmosphere is electric, and the overwhelming response from the locals and fans alike is a great sign for sports in Odisha and India. Bhubaneswar, the capital city of Odisha, is known for its rich cultural heritage and is often referred to as the ‘Temple City of India’. The ancient temples and monuments in the city have been beautifully illuminated for the event, adding to the already vibrant atmosphere. The streets are adorned with colorful murals celebrating the event, creating a truly convivial and celebratory atmosphere. Rourkela, on the other hand, is a bustling industrial city and Hockey pocket known for its steel plant. The cities underwent an aesthetic transformation for the event, with several fan parks and screenings being set up to provide an immersive experience for fans. 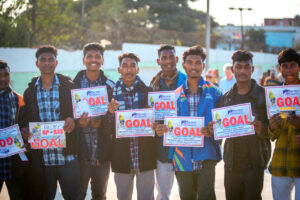 Besides, the deep love of Hockey that is ubiquitous amongst the people of Odisha. The great response can partly be attributed to the numerous fan experiences on offer. Amongst those is Olly Land, a themed fan experience based on the mascot for Odisha Sports, ‘Olly’. Olly Land comprises many features to captivate visitors, including stunning display of lights in the form of art installations that pay homage to the culture of Odisha. They feature the Sambar Deer, the Rath Wheel (an iconic symbol of the sacred Konark Temple), the coveted World Cup trophy and a hockey stick.

The fan parks in both cities are bustling with activity, providing an opportunity for fans to engage in a variety of activities and games. The screens set up for live screenings of the matches are also, providing an opportunity for fans to come together and cheer on their teams. The fan parks have several food and drink stalls selling delicious local delicacies, adding to the overall experience.

In addition to the sporting action, there are also several cultural events taking place in both cities. For example, ‘Dot Fest’, is an event in Bhubaneswar, which runs from January 15-29, will feature an assortment of entertainment activities such as traditional dance performances to music concerts, there is something to engage fans of all ages. The cultural events are taking place in the evenings, providing an opportunity for fans to relax and enjoy the local culture after a day of exciting sporting action, and soak in the pleasant winter breeze. 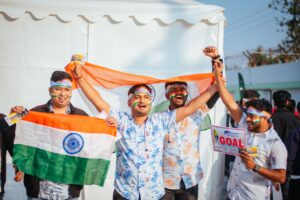 The event has attracted fans from all over the world, and the host cities have been beautifully curated to provide an unforgettable experience. As honorable Chief Minister, Mr Naveen Patnaik said, “I would like to welcome the delegates, fans and athletes from all over the world. Odisha has long been known for its hospitality and I am sure everybody will take home a little part of Odisha.”

In conclusion, with so many fan experiences on offer and cultural events taking place, there is something for everyone to enjoy, regardless of age, gender or interest. The Odisha Government takes pride in hosting this mega event in association with Hockey India.