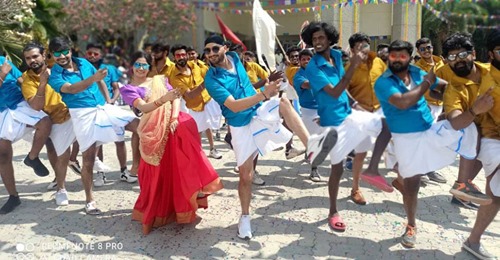 Bhubaneswar: India’s most successful off-spinner Harbhajan Singh, popularly known as Bhajji, is all set to amuse his fans in a new avatar as shooting of the veteran cricketer’s Tamil debut ‘Friendship’ has resumed in full swing.

Shooting of the movie was halted for a few months last year due to COVID-19 lockdown.

Two days ago, the 40-year-old World Cup-winning off-spinner confirmed that the final schedule production his upcoming movie has begun.

Friendship Movie Final Schedule Production has taken of in Jet Speed. I am eagerly waiting to meet you al in theaters in a Different Pitch in a New Avatar.This Summer Let’s Rock #FriendshipSummer@ImSaravanan_P @JPRJOHN1 @akarjunofficial @shamsuryastepup #Losliya @actorsathish pic.twitter.com/D54Q84JVeJ

He took to micro-blogging site Twitter and shared shared few pictures of the shoot. In the pictures, Bhajji can be seen donning a half-folded Mundu (a traditional garment worn around the waist in southern India) with a blue shirt and a sun glass. However, Harbhajan didn’t reveal the release date of the movie.

Friendship is a comedy movie written and directed by John Paul Raj and Sham Suriya. Besides Harbhajan, the movie stars Arjun, Losliya and Sathish in leading roles.