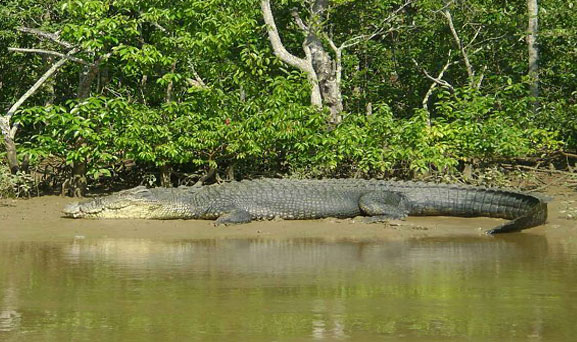 Kendrapara: The number of crocodiles in Bhitarkanika National Park in Odisha’s Kendrapara district has increased as per the findings of the latest headcount of the reptiles.

Though the estuarine crocodiles are also found in West Bengals Sundarbans and Andaman Islands, the density of croc population is more in Bhitarkanika, he said. The latest census figure of these animals, which was released by Forest department on Saturday, has come out with an encouraging trend of rise in the number of estuarine crocodiles.

Four giant male crocodiles measuring more than 20-feet long were sighted by enumerators. This included a 21-foot long crocodile that finds a pride of place in the Guinness book of record as the world’s largest living crocodile, the official said.

The region is criss-crossed by innumerable water inlets, creeks and nullahs all forming the part of the Bhitarkanika river system. The enumerators extensively covered vulnerable riverside villages where reports of man-croc conflict had reached a flashpoint in recent past. However, the sighting of these reptiles was few and far.

Four decades ago when the Government of India and UNDP thought of saving crocodiles, there were hardly three to four nests detected in the area while the population of salt-water crocodiles in Bhitarkanika area was estimated to be 95, including 34 adults. Now, the population has swollen to 1,757.

Since 1977, salt-water crocodile eggs have also been collected locally, and young crocodiles have been released in the creeks and the estuaries. “We have been able to reverse declining crocodile population and make the area a safe habitat for the reptile”, said the official.

Builder arrested for misbehaving with woman staff in Odisha capital