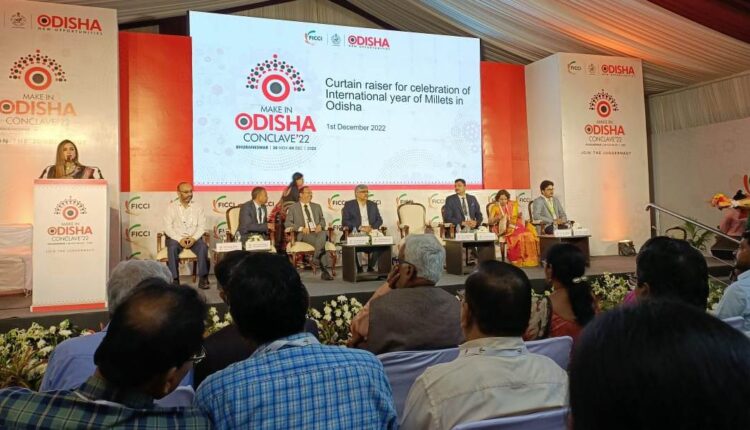 He also released a video and a coffee table book on Odisha Millet Mission (OMM) on the occasion.

“Odisha Millets Mission has done remarkable work in terms of promoting millet, which is known as ‘Aadi Anna’ or the ancient grains,” he said.

In collaboration with Mission Shakti, the OMM has been able to extend its reach and is reshaping the consumption practices in rural and urban areas, he added.

“We removed millets from our plate and imported oats from foreign countries. Millet growing area in the country dwindled by 87 per cent in last 50 years. People often perceive millet is low grade food or poor man’s crop. But we forget that millet is Aadi Anna,” Balakrishnan said.

Development Commissioner Pradeep Kumar Jena said millet is now recognized as a solution to global food crisis. Millet is the ancient grain that has the potential to mitigate climate change, address malnutrition and empower millions of small-scale farmers.

The curtain raiser event is a timely step by the state government to popularize millet as well as its value-added products to make it a peoples’ movement, he added.

He congratulated OMM team to celebrate the curtain raiser for IYoM-2023 at the Make in Odisha Conclave-2022.

“OMM was launched in 30 blocks of Odisha in 2017. Now, we have set the target to extend the programme to all 30 districts,” Jena said.

The main objectives of OMM are to increase the area under millet cultivation, raise productivity, promote post-harvest management and create a good market for the crop. The state government will procure around 6 lakh quintals of millet under MSP in this financial year, Jena added.

Following the recommendation of India, the United Nations General Assembly has declared 2023 as IYoM. Over 70 countries across the globe will celebrate IYoM to increase awareness on health benefits of millets, he said.

“Our state has emerged as a model state for others in promoting millets in farms and food plates. Odisha became the first state to declare millet cultivation incentive to farmers through direct benefit transfer and include Ragi Ladoo in the Integrated Child Development Scheme,” Padhee added.

Shankar Banerjee of Big Basket, India’s largest online supermarket, said “We are now sourcing millets from Odisha, which has emerged as the top millet producing state in India. We are going to work with OMM very soon.”

Director of Agriculture and Farmers Production Prem Chandra Choudhry proposed the vote of thanks.