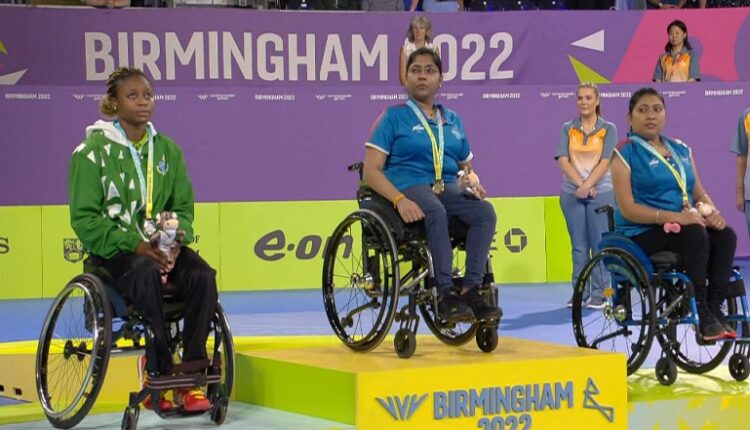 In the final played late on Saturday night, the 35-year-old Bhavina defeated the Nigerian 12-10, 11-2, 11-9 in the final in which her opponent put up some fight in the first game before her challenge fizzled away.

India also won the bronze medal in Class 3-5 competitions as Sonal Patel defeated England’s Bailey 11-5, 11-2, 11-3 in the playoff for the third place.

This is Bavina Patel’s second big achievement in para table tennis in the last one year as she had put Indian table tennis on the world map at the Tokyo Paralympics by winning a silver medal, the first by a table tennis player — able-bodied or otherwise — at the quadrennial extravaganza.

Last year, around this time, not many knew who Bhavina Patel was and what was her claim to fame. The Tokyo Paralympic Games changed her life as she went on to win a silver medal. Since than Bhavina has not participated in many international competitions because of the pandemic.

The Birmingham 2022 Commonwealth Games, at which para-table made its debut, was a big opportunity for Bhavina to further bolster her position as the best player in Class 3-5 and she did that in style, without any hiccups.

Asked whether she was happy to prove that Tokyo Paralympics was no flash in the pan, Bhavina said she was not bothered by such thoughts.

“I don’t know. I’m too happy, speechless. I’m a fighter. When I want to do something, I do it. (For winning this medal) full credit goes to my family, my coaches, my (table tennis) federation, the Paralympic Committee of India, the Sports Authority of India, and all my friends who pray for me. This is for them.”

Bhavina, who took to table tennis rather late in her life to gain fitness as a mobility disorder was resulting in her gaining weight, said the sport means the world to her.

“Table tennis means life. Without table tennis, I can’t live in this world.”

Bhavina, who trains in her hometown Ahmedabad with a practice robot due to the pandemic, said she would think about giving her robot a name, now that it has helped her win the Commonwealth Games gold medal.

Sonal Patel was also ecstatic after winning a bronze medal.

“I feel good and happy, so happy. Birmingham has been good,” she said.

The next challenge for both Bhavina and Sonal will be the World Championships in Spain in November. And they would like to do well there to bolster their claims at the Paris 2024 Paralympic Games.