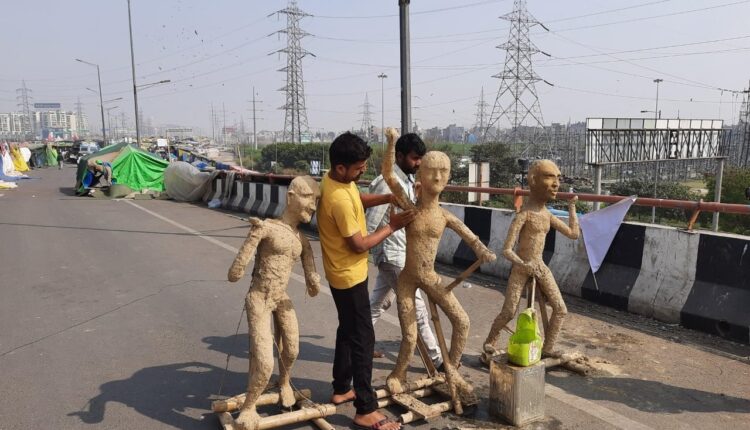 Ghazipur (New Delhi): Sculptor Muktikant Biswal of Rourkela arrived at the Ghazipur border in the national capital all the way from Odisha after riding a bicycle for 17 days to lend his support to the protesting farmers by making idols of clay.

The protests by the farmers have been continuing on the borders of Delhi for the last three months where everybody is contributing in their own way by participating in this agitation. In such a situation, Biswal is registering his protest by making an idol at the Ghazipur border.

Biswal has created three idols with the help of clay, showcasing one corporate executive and two farmers. The sculptor has depicted the farmers as ‘bulls’ in the the idol, symbolising the alleged exploitation of farmers in contract farming.

The 32-year-old sculptor told IANS,”I am making these sculptures in support of farmers and have made these sculptures depicting contract farming. There will be two farmers in each of the three idols with a plough on their shoulders. There will also be a wealthy type of person carrying the plough in one hand and a whip in the other hand.”

“In the place of the bulls, two farmers have been depicted with a plough on their shoulders. I am against the Union farm laws and reached the Ghazipur border on January 29,” Biswal said.

After failing to meet PM, Odisha youth sits on dharna in…

However, after completing these idols, Biswal would make more idols on agricultural issues.

There have been 11 rounds of talks between the Central government and the farmer organisations, but no consensus have been achieved so far. On the other hand, both the farmers and the Centre are ready to start negotiations again, but have not yet been able to come to the dialogue table.

The farmers have been protesting at various borders of the national capital since November 26, 2020 against the three newly enacted Union farm laws.

The protesting farmers are opposing the Central government over the Farmers’ Produce Trade and Commerce (Promotion and Facilitation) Act, 2020; Farmers (Empowerment and Protection) Agreement of Price Assurance and Farm Services Act 2020 and the Essential Commodities (Amendment) Act, 2020.