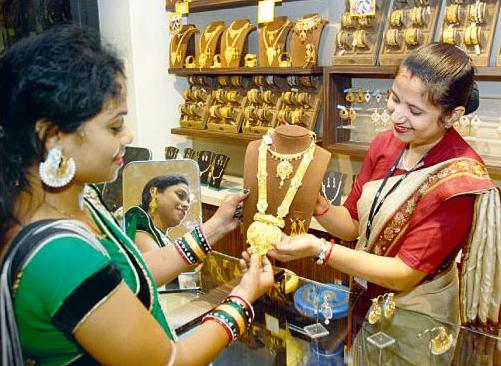 Bhubaneswar: Akshaya Tritiya, the day when the people go on a gold-buying spree, has failed to cheer the denizens in Odisha that has been battered by the recent severe cyclonic storm FANI.

As the state is facing a cash crunch situation with ATMs running dry in the absence of power supply following the cyclone, people refrained themselves from buying gold keeping the festival a low-key affair.

In the Twin Cities of Cuttack and Bhubaneswar, jewellery showrooms that register huge footfalls on this day wore a deserted look today as a handful of customers purchased the yellow metal.

While people are running short of cash with no ATM and banking services, failure in online transaction or any other mode of digital payment has only added to the woes, said a staff of a jewellery shop.

“Neither POS machines are functional nor can we make other online transactions through UPI. And we have no sufficient cash to buy gold,” said Lagna Mohanty, a housewife.

However, the Agrarian festival was observed at some places in the state where farmers performed ‘Akhi Muthi Anukula’, the ceremonial act of sowing seeds in their paddy fields after ploughing. The occasion marks the commencement of agricultural works.

The festival also marks the beginning of ‘Chandan Yatra’ of Lord Jagannath and his divine siblings at several shrines in Odisha. The construction of chariots for Ratha Jatra of Lord Jagannath in Puri also starts from this day.

AP provides over 2,000 workers for power supply restoration in Odisha