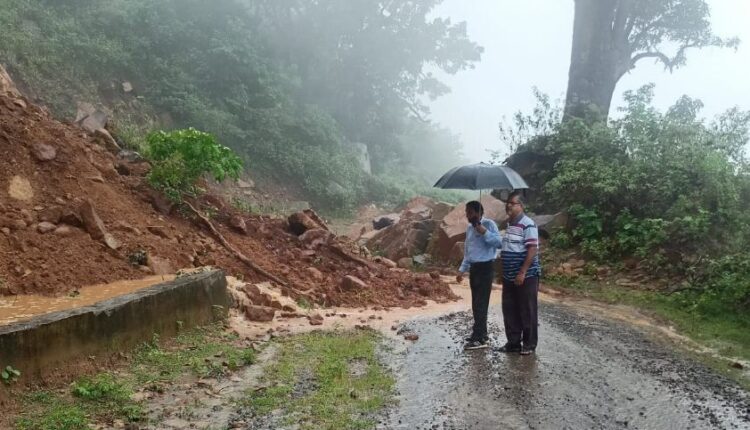 Bhubaneswar: Following incessant rainfall in Odisha’s Gajapati under the influence of Cyclone Gulab, landslide took place in Gumma block of the district.

As per reports, road communication between Namangarh Ajaygarh was affected due to the landslide.

The India Meteorological Department has issued Red Warning for seven districts of Odisha, including Gajapati in view of Cyclone Gulab.

“Heavy to very heavy rainfall at a few places with extremely heavy falls at one or two places very likely to occur over the districts of Ganjam, Gajapati, Kandhamal, Rayagada, Nabarangpur, Koraput and Malkangiri,” the IMD forecasted and issued Red Warning for the districts.

It has also issued Orange and Yellow warnings for several districts in connection with the cyclonic storm.

Orange Warning: Heavy to very heavy rainfall at one or two places very likely to occur over the districts of Puri, Khurda, Nayagarh, and Kalahandi.

Cyclone Gulab is likely to cross north Andhra Pradesh-south Odisha coasts between Kalingapatnam and Gopalpur as a Cyclonic Storm with maximum sustained wind speed of 75-85 kmph gusting to 95 kmph, around midnight of today. The landfall process will commence from late evening of today, the India Meteorological Department (IMD) said.

Currently, the Cyclone is being monitored by Doppler Weather RADAR at Visakhapatnam. Light to moderate rainfall in association with the outer spiral bands of the system has commenced over south coastal Odisha and coastal Andhra Pradesh since early morning of today.