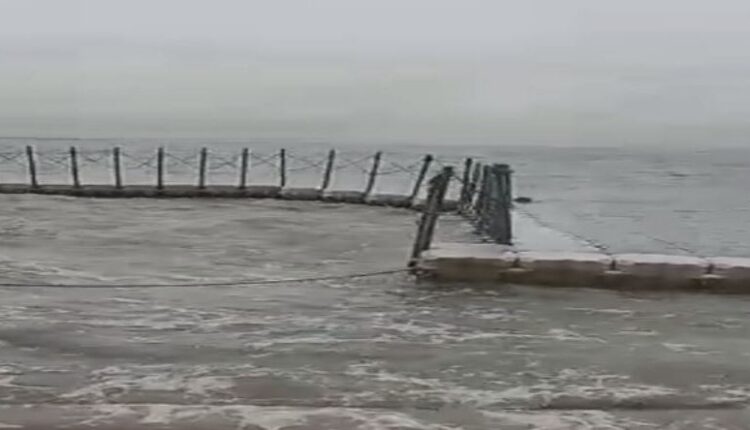 Bhubaneswar: Even as the cyclonic storm Jawad over westcentral Bay of Bengal is weakening, India Meteorological Department (IMD) issued heavy to very heavy rainfall warning for several districts of Odisha for today and tomorrow.

As per IMD’s latest bulletin, Cyclone Jawad over westcentral Bay of Bengal moved slightly northwards with a speed of 4 kmph during past 6 hours and lay centered at 5.30 am today, about 230 km southeast of Vishakhapatnam (Andhra Pradesh), 340 km south of Gopalpur (Odisha), 410 km south-southwest of Puri (Odisha) and 490 km south-southwest of Paradip (Odisha).

Under influence of the cyclonic storm, many districts of Odisha are likely to experience intense rainfall till December 6, 2021.

December 4-5: Red warning: Heavy to very heavy rainfall very likely to occur at isolated places with extremely heavy falls at one or places (more than 20 cm) over the districts of Ganjam, Puri and Jagatsinghpur.

Orange warning: Heavy to very heavy rainfall very likely to at one or two places over the districts of Balasore, Bhadrak, Kendrapada, Cuttack, Khordha, Nayagarh, Gajapati and Jajpur.

Yellow warning: Heavy rainfall very likely to occur at isolated places over the districts of Kandhamal, Rayagada, Keonjhar and Mayurbhanj.

December 5-6: Orange warning: Heavy to very heavy rainfall very likely to occur at one or two places over the districts of Mayurbhanj, Balasore, Bhadrak, Kendrapada, Jagatsinghpur, Jajpur, Cuttack and Puri.

Squally winds, speed reaching 45-55 kmph gusting to 65 kmph likely to prevail along & off North Andhra Pradesh–Odisha coasts during next 12 hours. It will gradually increase becoming 55-65 gusting to 75 kmph till morning of 5th and squally winds 50-60 kmph gusting to 70 kmph from 5th morning till afternoon. It would decrease thereafter gradually.

Fishermen are advised not to venture into westcentral & northwest Bay of Bengal and along & off north Andhra Pradesh-Odisha-West Bengal coasts till December 5, 2021.