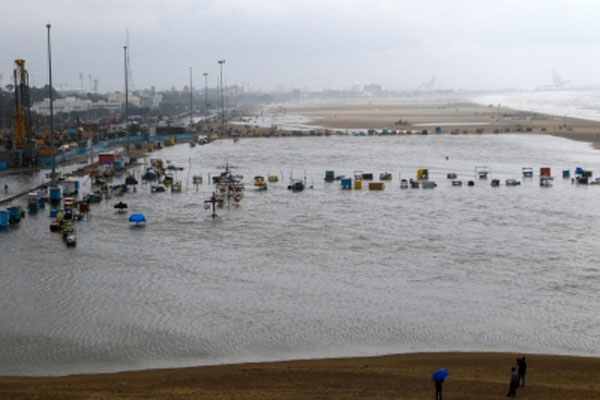 Chennai: With heavy rain pounding many parts of Tamil Nadu after Cyclone ‘Mandous’ touched the land, five people were left dead and 10,000 people were lodged in shelter homes.

Tamil Nadu revenue department officials said that around 300 houses were damaged in the rain after Cyclone ‘Mandous’ struck, and 169 shelters have been set up in Chennai and its suburbs.

The red alert announced in Kancheepuram, Chengalpattu and Villupuram districts of Tamil Nadu continued for Sunday also. The Tamil Nadu government is likely to declare a holiday for the schools and other educational institutions, including colleges on Monday also considering the heavy damages caused by the cyclone.

More than 500 trees were uprooted during the cyclone and the Greater Chennai Corporation officials removed them by Sunday morning. The Hindustan Petroleum Outlet on Pantheon Road, Chennai was damaged after a huge banyan tree crashed on it. However, workers were unhurt as the banyan tree crashed on the outlet just after the workers had closed the pump and left.

The Greater Chennai Police were also involved in clearing the trees that were uprooted during the cyclone.

Meanwhile, Tamil Nadu Chief Minister M.K. Stalin told the media persons that proper preparation and planning for the Cyclone ‘Mandous’ has led to the concerned departments swinging into action and thus reducing the damage.

Twitter Blue with verification arrives on Dec 12; $8 for Android, $11 for iPhones