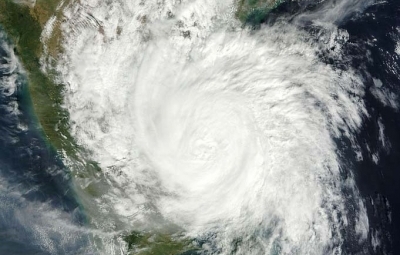 Share
Kolkata: As cyclone Sitrang is moving closer to West Bengal, the Sundarbans area in the coastal region of South 24 Parganas and North 24 Parganas has been identified as “most vulnerable to devastation”.

According to the IMD office in Kolkata, Sitrang is currently 380 km away from Sagar Island — the point of the confluence of river Ganga and Bay of Bengal.

The cyclone is expected to make landfall in between Tinkona Island and Sandwip in Bangladesh on early Tuesday morning.

The speed of wind could be between 70-80 kmph in these coastal districts.

Light to medium rainfall is also expected in the Gangetic pockets of Howrah, Hooghly, Nadia and Murshidabad. However, as per the IMD office, the impact would be negligible in the state capital Kolkata which might witness sporadic rainfall as long under the cyclone impact.

The conditions are expected to improve gradually.

West Bengal Chief Minister Mamata Banerjee, during cyclone Yaas and cyclone Amphan, had stayed at her office in the state secretariat of Nabanna overnight and monitored the entire situation from a control room there. However, this time, she would be staying at her home at Kalighat area in south Kolkata owing to the annual Kali Puja rituals at her residence.

Officials said the Chief Minister would be monitoring the situation from her home apart from interacting with the state administration and issuing necessary instructions.

An integrated control room has already been opened up at Nabanna, which will be manned by six secretary-level IAS officers.

Six most vulnerable districts have been identified. Besides, the districts’ respective District Magistrates, a secretary-level officer will be in charge of each district for coordinating with the chief minister.