Bhubaneswar: Cyclone Sitrang is likely to cross Bangladesh coast between Tinkona Island and Sandwip close to Barisal in the early hours of tomorrow (October 25), said the IMD in its latest bulletin today.

“Cyclonic storm ‘Sitrang’ pronounced as ‘Si-Trang’ over northwest and adjoining central Bay of Bengal moved north-northeastwards with a speed of 28 kmph during past 6 hours and lay centered at 1730 hours IST (5.30 pm) of today (October 24) over north Bay of Bengal near latitude 20.70N and longitude 90.10E, about 230 km east-southeast of Sagar Island and 230 km south of Barisal (Bangladesh). It is very likely to continue to move north-northeastwards and it is likely to cross Bangladesh coast between Tinkona Island and Sandwip close to Barisal during midnight of today and early hours of tomorrow (October 25),” read the IMD bulletin. 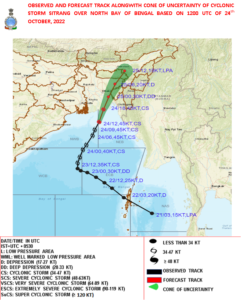 Some places in costal West Bengal and most of the places in India’s northeastern states are likely to witness heavy to extremely heavy rainfall due to the influence of cyclonic storm Sitrang tomorrow, added the IMD.

“Tidal waves of around one metre height are likely to inundate low-lying areas of West Bengal (North and South 24 Praganas) on October 25. The sea condition is likely to remain very rough along and off Odisha coasts during next 12 hours,” said the IMD.

“Light rain/thundershower is very likely to occur at a one or two places over the districts of North Coastal Odisha,Keonjhar, and Mayurbhanj from 8.30 am of October 25 to 8.30 am of October 26,” said the IMD regional centre in its evening bulletin today.

At 42, Sunak youngest to take UK PM office in over 200 years