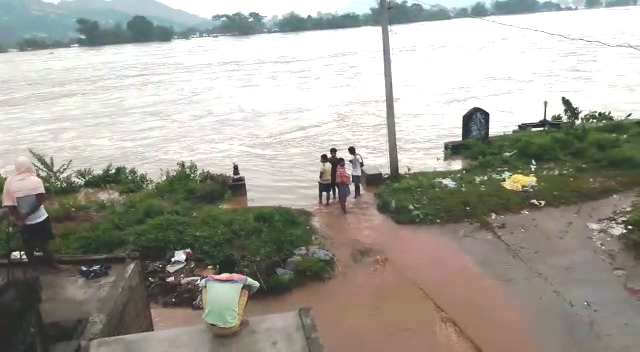 Bhubaneswar: Under impact of severe cyclonic storm ‘Titli’, continuous heavy downpour lashed several parts of south and coastal districts of Odisha in the past 24 hours. The heavy rainfall triggered flood like situation the districts of Ganjam, Gajapati, Puri and Balasore.

The situation remains vulnerable especially in Ganjam and Gajapati districts where the remote areas have been cut off due to incessant rain triggered by the cyclonic storm ‘Titli’.

The road communication was disrupted in low lying areas of Balasore district. According to reports, the flood water is flowing 6 metre above the danger mark in the Jalaka River.

The normal life was thrown out of gear in Bhanjanagar of Ganjam district due to continuous rain that triggered flood like situation. The roads and houses were inundated due to heavy rainfall in Puri district. Several places in Cuttack and Bhubaneswar have remained waterlogged.

Meanwhile, thunderstorm and lightning warning has been issued for 15 districts of Odisha for today.

“Moderate to severe thunderstorm accompanied with lightning, intense rainfall and strong surface wind very likely to occur at a few places over the districts of Khurdha (including Bhubaneswar), Cuttack, Mayurbhanj, Balasore, Keonjhar, Dhenkanal, Angul, Sambalpur, Jajpur, Bhadrak, Jagatsinghpur, Kendrapara, Kandhamal, Sundargarh and Deogarh between 7.45 am to 11.45 am,” the Bhubaneswar MeT said in a release.

The fishermen are advised not to venture into sea along and off Odisha coast and North Bay of Bengal during next 30 hours.

Notably, the cyclonic storm ‘Titli’ over south Odisha moved eastwards in past six hours with speed 8 kmph, weakened into a deep depression and lay centered at 11.30 pm of October 11 over south Odisha near latitude 20.1 degree N and longitude 84.2 degree E, 100 km east-northeast of Bhawanipatna and 50 km north-northeast of Phulbani.

It is likely to move northeastwards towards Gangetic West Bengal across north Odisha.

‘Titli’ brings ‘joy’ to some in Odisha