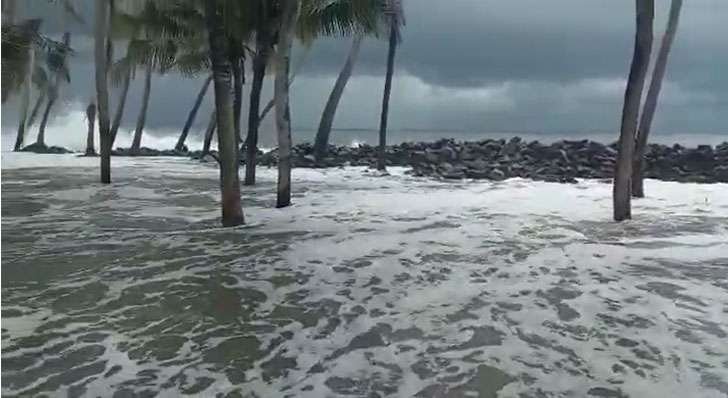 Bhubaneswar: The very severe cyclonic storm Yaas crossed north Odisha coast after making a landfall at Bahanaga area in Balasore district in the morning. It will weaken gradually during next 3 hours.

“Very severe cyclonic storm Yaas crossed north Odisha coast about 20 km south of Balasore during 10.30 AM to 11.30 AM on May 26 with estimated wind speed of 130-140 kmph gusting upto 155 kmph. It then moved northwestwards and lay centred at 11.30 AM on May 26 over north coastal Odisha, about 15 km south-southwest of Balasore,” informed the India Meteorological Department in a latest bulletin.

The current intensity of Cyclone Yaas near centre is 120-130 kmph gusting to 145 kmph. Earlier, the very severe cyclonic storm moved north-northwestwards with a speed of about 24 kmph during past 6 hours.

During the period, the tidal waves of height 1-2 meter above astronomical tide are likely to inundate low lying areas of Balasore, Bhadrak in Odisha and Medinipur, South 24 Paganas districts during next 3 hours and decreased gradually thereafter.

Cyclone Yaas hit Bahanaga area as the very severe cyclonic storm with a wind speed of 130-140 kmph wreaking havoc in Bhadrak and Balasore districts. The process of landfall started at 9.00 AM and completed at around 1.00 PM today. The rainfall under influence of the cyclone has been predicted in coastal and north coastal districts till tomorrow.

Cyclone Yaas has completed the process of landfall. However, the rainfall will continue till tomorrow. Fishermen are advised not to venture into the sea till tomorrow morning as the condition of sea will be rough, informed Umashankar Das, senior scientist, Bhubaneswar MeT.