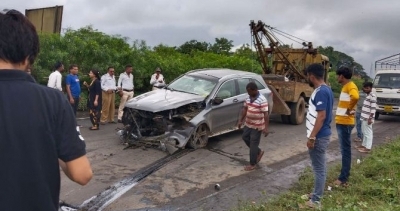 Palghar: In a significant development, the Palghar police have booked Anahita Darius Pundole for ‘negligence’ in connection with the car accident that killed industrialist Cyrus P. Mistry of the Shapoorji Pallonji Group on September 4, an official said here on Saturday.

The Palghar police have filed a case against Anahita Pundole (55), who was said to be speeding the illfated Mercedes Benz on a bridge over Surya river on the Ahmedabad-Mumbai National Highway.

After a thorough probe into the case and questioning of Anahita by police officer Prashant Pardeshi, the Kasa police station in Palghar has slapped the case against her by invoking IPC Section 304(A) pertaining to causing death of any person by rash or negligent act, along with relevant sections of the Motor Vehicles Act.