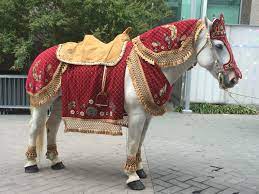 Mahoba (Uttar Pradesh): The wedding of a Dalit youth who had sought police protection to ride a horse to his bride’s house, has run into fresh trouble after the bride was found to be a minor.

Alakhram Ahirwar, a native of Madhavganj in Mahobkanth area of Mahoba district, was all set to marry on June 18 and had approached the local police, seeking protection for riding a horse during a pre-marriage ritual on his wedding day.

Messages circulating on social media have claimed that the bride-to-be is 17 years and one month old, as per her Aadhaar card.

According to additional superintendent of police (ASP) Mahoba R.K. Gautam, “We have initiated a probe after coming across the viral messages on social media that the girl with whom Ahirwar’s marriage is to be solemnized is a minor.”

Circle Officer Kulpahar has been instructed to conduct the probe and submit a report in this regard soon.

“If the girl is be found to be a minor, Ahirwar’s application for protection will be rejected,” he said.

Ahirwar has told the reporters that he was not aware of the exact age of his bride-to-be. “I came to know about the matter through viral messages on social media. I am a law-abiding citizen and will cooperate fully with the police for a probe regarding her age,” he said.

Another 43 persons die of COVID-19 in Odisha; Details here