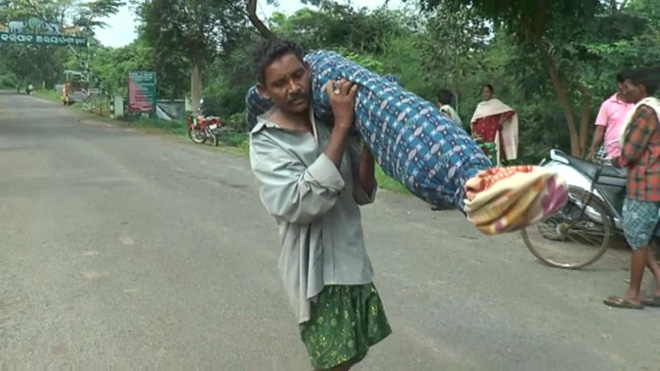 With the outrage over a tribal man carrying his dead wife on his shoulder reaching a crescendo, the Odisha government today terminated the contract of a contractual staff for dereliction of duty.

The Chief District Medical Officer (CDMO) today terminated the employment contract of a male nurse pertaining to the Dana Majhi incident. The delinquent employee has been identified as Rajendra Rana.

Two among principal held after student’s death in…

Dead woman carried on cot for non-motorable road in Odisha

Besides, the government has also terminated the contract of the security agency.

Earlier in the day, state Health Minister Atanu Sabyasachi Nayak had said that stringent action would be initiated against the persons found guilty and investigation in this regard is on.

The investigation is underway and messures will be taken so that this type of incident is not repeated, Nayak said.

Notably on Wednesday, Dana Majhi was spotted carrying his dead wife, Amang Dei, on his shoulder about 10 km from the District Headquarters Hospital to his village at Melghara village under Thuamul Rampur block, about 60 km from the health facility. Dana was alleged denied a hearse to ferry the body to his village.

Do the women hockey Olympians from Odisha deserve this?