Dead rat found in meal at Aahaar centre in Odisha 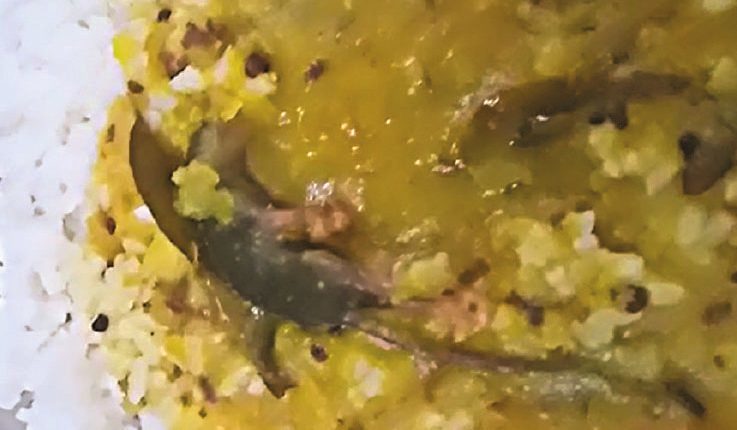 Berhampur: In a shocking incident, a dead rat was found in meal served at a government-run Aahaar centre situated near Berhampur Railway Station.

Even after the matter was brought into notice of the Aahaar centre officials immediately by a person, who found the dead rat in a dish on his plate, the remaining dish at the centre was served to others.

According to reports, a youth namely Sunil Behera along with his friend had visited Berhampur from Bhubaneswar on Saturday to appear in a competitive examination. After alighting at the railway station, the duo found an Aahaar centre nearby and preferred to dine out there. They bought the tickets and stood in queue to have Rs 5-meal at the Aahaar centre.

While going to have lunch together, Sunil found a dead rat in his meal served on his plate. Immediately, he showed it to staff of the Aahaar centre. However, without paying attention to the incident, one of the employees threw the customer’s meal into a bin and continued serving the meal to others.

Despite his complaint, the Aahaar centre authorities remained silent on the issue.

Even though the state government has been laying emphasis on the quality of meal at Aahaar centres, such incident raised eyebrows of many putting the government’s ‘Mo Sarkar’ initiative in the dock.

Last year in October, Chief Minister Naveen Patnaik had directed his ministerial colleagues to take lunch in Aahaar centres and schools to test quality of food while making surprise visits to districts every month to monitor proper implementation of various programmes.

BBA student among 2 arrested in Odisha capital under Arms Act