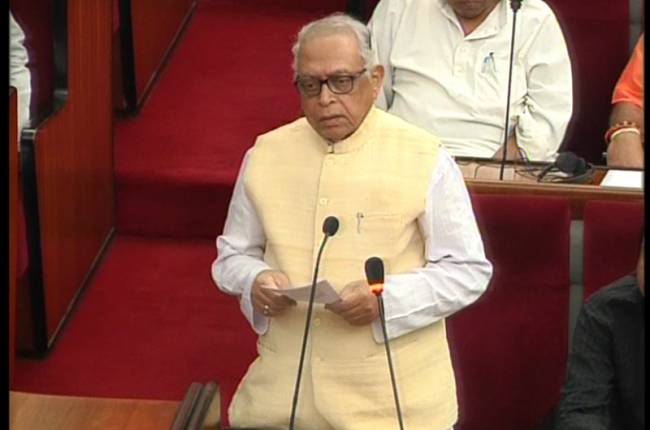 Bhubaneswar: Congress Legislature Party (CLP) leader Narasingha Mishra today again wrote a letter to Chief Minister  Naveen Patnaik appealing him to call an all-party meeting to restore normalcy in the state Assembly and assure that no farmer suffers during the paddy procurement process.

In his letter, Mishra pointed out that no business has been transacted since the House assembled on March 12 for second phase of the budget session. The House has been stalled by both ruling party and the entire Opposition on one ground or other. Legislators of the ruling party are protesting in the middle of the House for last four days.

“As a leader of the Assembly,  it is your responsibility to intervene for smooth functioning of the House. Attempts by the Speaker to bring the House to order has failed. In democracy, ruling party is not supposed to create pandemonium in the House demanding action against a member of Opposition party. If Speaker feels that the member has committed breach of privilege, action can be taken against him as per Rules of Procedure and Conduct of Business in the Odisha Legislative Assembly,” the CLP wrote.

“Rampant corruption in procurement of paddy and dissatisfaction among the farmers are being reported by media frequently. When the the Minister of Parliamentary Affairs on behalf of  the state Government has already assured in the House to purchase paddy from genuine farmers, Minister In-charge of Food Supplies and Cooperation should not make confusing remarks contrasting the statement made by the Minister of Parliamentary Affairs,” he further added.

Earlier in the day, a delegation of BJD legislators marched to Raj Bhawan from the state Assembly and  submitted a memorandum to the Governor regarding irresponsible behavior of BJP MLA Subash Panigrahi by attempting suicide inside the House.

Kohli gets angry with Shardul Thakur over fielding [Watch]