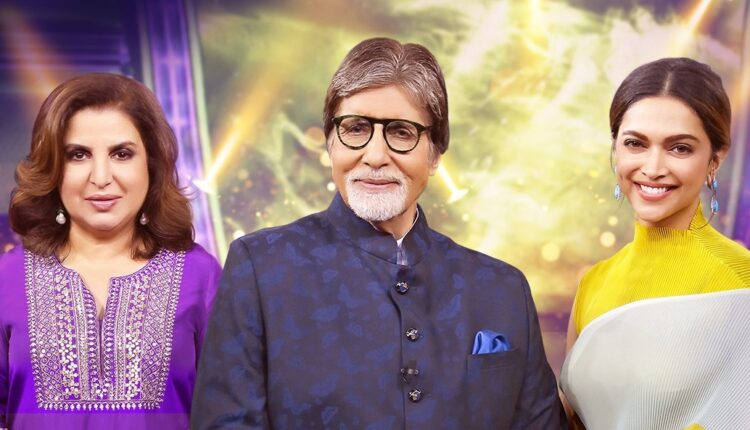 Mumbai: The ‘Shaandaar Shukravaar’ episode of ‘Kaun Banega Crorepati 13’ (KBC-13) on Friday will have Deepika Padukone and director-choreographer Farah Khan on the hot seat with the host of the show, Amitabh Bachchan.

Before the start of the episode, Deepika will be seen gifting Big B and Farah, her mentor, Ganpati idols. Moving ahead, Big B will be seen engaging in banter with his guests. They share personal anecdotes and then they are taken by complete surprise by Big B when he enacts Deepika’s memorable ‘Ek chutki sindoor ki keemat’ scene from the film ‘Om Shanti Om’, which was directed by Farah.

In her interaction with the host, Deepika reveals that she is a big foodie. She doesn’t just love food, but unlike other people who eat thrice in a day, she eats “every three minutes”. Deepika humorously mentions that it is because of Big B, who had emptied her lunch ‘dabba’, that she has to eat every three minutes.

Another interesting revelation Deepika will make in the show is that her husband and popular actor Ranveer Singh does not make her breakfast. Hearing this, Big B will be seen calling Ranveer to sort out this matter.

While talking about her personal experiences, Deepika recalled that in order to cast her for ‘Om Shanti Om’, Farah took her body of work to Australia to show it to Shah Rukh Khan, who was then shooting for ‘Chak De! India’. Farah had barely shown him her photo and all SRK said was, ‘Done’.

(The episode will air on September 10 at 9:00 p.m. on Sony Entertainment Television)

College density in Odisha remained below national average during 2014-19: CAG