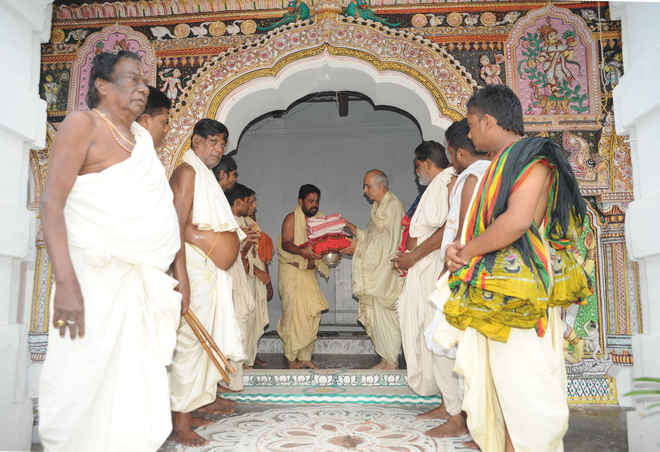 Puri: Following over a week long herbal treatment and secret rituals at Anasara house by the dedicated servitors of Jagannath temple in Odisha’s Puri, the deities recovered from fever and illness.

The temperature of lords receded after the servitors offered Dasamula, prepared from different medicinal plants by the Raja Baidya (Royal Physician) on Tuesday. The deities were offered holy basil leaves and sandalwood paste was applied on their entire body. The paste will remain on their bodies for one year.

Soon after the deities recovered from illness, the message was sent to King Gajapati Dibya Singh Deb, the first servitor of Lord Jagannath. The servitors went to King’s palace in a grand procession carrying dried sandalwood flakes from Lord Jagannath’s body, his patta clothes as part of token of blessings to inform Gajapati yesterday. Over 50 servitors including Nabakishore Patimohapatra and Ganesh Dasmohapatra had participated in the ceremony.

The king conducted ‘sareebandha’ rituals (rituals in which the pieces of clothes are tied around the heads of servitors) to show respect to the servitors for their dedication and services towards lords during 14-day long Anasara (hiberanation) period.

With two more days to go, the pilgrim town Puri is gearing up for world famous event Rath Yatra (car festival) scheduled on June 25. The deities are getting ready for 9-day trip to their birth place Gundicha Temple.