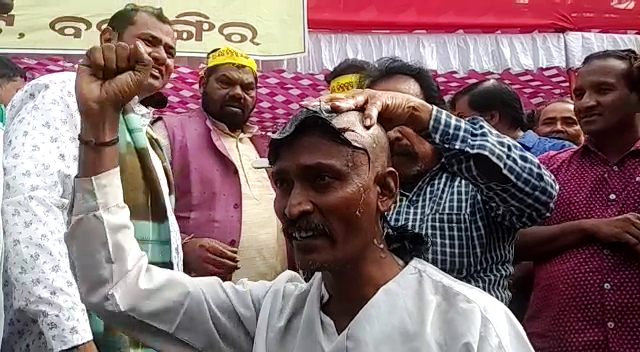 Balangir: A lawyer tonsured his head as a mark of protest over establishment of a permanent bench of the Orissa High Court (HC) here today.

Pressing for their long-standing demand, lawyers staged a demonstration and a protest rally in the town today. During the protest, an agitating lawyer had his head tonsured in public alleging that State Government has remained indifferent towards their genuine demand.

Besides, the protesters were also seen obstructing district collector Arindam Dakua from entering his office. During their 24-hour bandh that began on Monday, the lawyers had threatened that civil court and Collector and Tehsil offices will remain closed for seven days from December 4 to 10.

The lawyers threatened that they would continue their agitation until their demand is fulfilled. Several outfits, including the Central Action Committee (CAC) also joined the protest today.