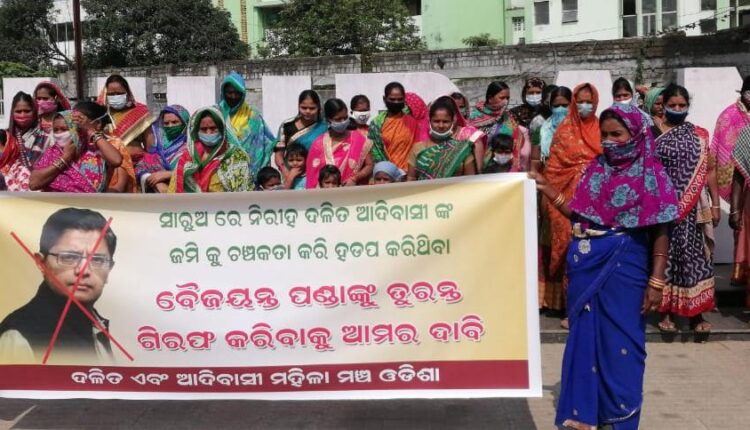 Bhubaneswar: Demanding arrest of BJP National Spokesperson Baijayant Panda in connection with the alleged Sarua land scam, over a hundred women under the banner of  Dalit and Adivasi Mahila Manch hit the streets here today.

Holding banner and placards and shouting slogans against Panda, the women activists staged the protest at Master Canteen here.  They alleged that the BJP leader has exploited the Dalit and Adivasi people and acquired their land unlawfully.

“The saffron part leader is a cheater. He has grabbed the land belonging to scheduled caste persons at Sarua village in Khordha district in fraudulent manner,” claimed a protestor. Panda should be arrested immediately so that the tribal people can get justice, she added.

It is pertinent to mention here that the Economic Offences Wing (EOW) of Odisha Crime Branch has arrested Manoranjan Sarangi, Chief Financial Officer (CFO) of Odisha Television Limited (OTV) and  Director of Odisha Infratech Private Limited, in connection with the land scam. Following the arrest, the official resigned from both the posts.