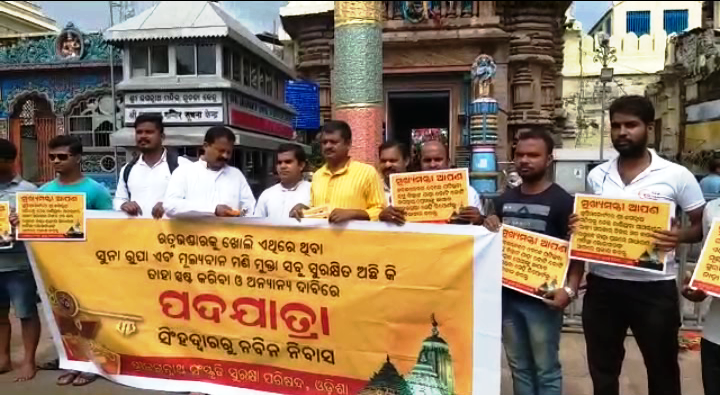 Puri: The Shree Jagannath Sanskruti Surakhya Parisad today embarked on a Padayatra from Puri to meet Chief Minister Naveen Patnaik to press for their various demands, including opening of Srimandir’s Ratna Bhandar for an audit and a clarification on the safety of ornaments and other valuables kept inside it.

Members of the outfit kicked off the Padyatra that in front of the Singhadwar at 9 AM and will reach Naveen Niwas in Bhubaneswar on August 18 morning via Chandanpur, Sakhigopal, Delang and Pipili. They will later submit a memorandum to CM Naveen.

The activists alleged that though Ratna Bhandar was opened before Rath Yatra, but no audit of the treasure trove of Lord Jagannath was conducted at that time raising doubts about its safety.

“Ratna Bhandar should be reopened to ensure safety of the precious ornaments, stones and other valuables kept in it. The audit report should also be made public,” said a member of the outfit.

The body also demands disclosure of the report on the Brahma Paribartan fiasco during the 2015 Nabakalebar.