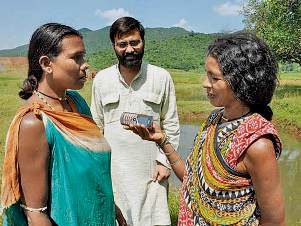 The story is a bit topsy-turvy these days as far as journalism education goes, especially in the tribal areas in Central India. Instead of rural students coming to teachers in cities, teachers are going to ‘adivasi haats’ or weekly markets.

This is happening in month long campaign of CGnet Swara www.cgnetswara.org), a community radio experiment on the mobile phone, which is reaching out to adivasi haats in Chhattisgarh, Madhya Pradesh, Odisha, Andhra Pradesh and Maharashtra. Through puppet shows, dance and drama audiences are being taught about how one can use their mobile phones to tell the world about things happening around them.

We are trying to democratize journalism. If we need a better functioning political democracy then like politics, journalism should also become everybody’s business.

“Mobile phone gives us that opportunity which has reached the remotest parts of the country, even in adivasi areas. And puppets are an entertaining way of teaching how one can use mobile phone to do journalism” says Lalsu Nagoti, a Gond tribal and head of CGnet Swara cultural team, who performs in the Gondi language.

“It is important that people feel empowered and not feel handicapped while sharing their stories. Adivasis are oral communities. So, the mobile phone is a natural platform for them. For this, we have started Adivasi Swara (www.adivasiswara.org) a platform in Gondi, the Main adivasi language in Central India,” Nagoti added.

“This is the world’s only website in Gondi script where people report using their mobile phones from the Gondi speaking areas of five states where the Yatra is traveling from May 15 to June 15. Internet penetration in these areas is less than one percent, but mobile phones reach more than 30 percent.

Once the reports are recorded in Gondi, they are translated, cross-checked by the moderators on the internet and, when released, they reach policy makers, journalists and urban activists, who often take them to their logical conclusion and many problems get solved.

Questions like – What do adivasis think why the mainstream media does not report their day to day problems? How can they change this?

A puppet called journalist P Ramnath, who unsuccessfully tries to raise rural issues in his paper, advises the rural folk to “create their own media” after he resigns from his job during the show.

Puppetry as a medium was never before used in adivasi areas, so it is a hit with villagers, says Gokaran Verma, who has trained 30 Adivasi volunteers to perform in the street shows.

“We also visit two villages every day and perform there,” said Pavan Pandey, a volunteer from Uttar Pradesh. “We eat and live with the people. It helps us better understand their issues.”

Sanjay Kumar,a volunteer from Bihar, said: “I am keen to take this experiment to my state also.”

“Earlier, we used to bring villagers for training in cities. But we are find that going to villagers and speaking to them through cultural shows is more effective,” said Mohan Yadav, a CGnet Swara trainer. When we are in haats, we are able to reach out to more people but villagers are more attentive when we go to their villages and perform.”

Naresh Bunkar who works with the Adivasi Jan Van Adhikar Manch in Kawardha district of Chhattisgarh said: “I use CGnet Swara to raise issues of Baiga Adivasis and have succeeded in solving more than 50 of their problems in the last few years. We have been successful in getting bribes returned, opening hand pumps, schools and hospitals, getting officers suspended and fined and much more,” he added.

Journalist Mahadev Soni said: “When we raise an issue in a newspapers, there is normally no action. But I notice that when the same issue is raised by villagers through their mobiles, many-a-times there is some action from officials, often quite quickly.”

“This is a new phenomenon which must be welcomed. I think it is an important experiment of journalism and these kind of cultural yatras will take the information about platforms like CGnet Swara to more people living in interior areas and they will be able to get their problems solved,” Soni added.

When seemingly small problems, but which have huge implications for people’s lives, get solved, you give them hope and help stop them from joining violent paths to achieve their goals. If we can solve small problems, we will also be able to stop bigger problems that are nothing but an accumulation of the small problems.

*Shubhranshu Choudhary is founder of CGnet Swara. He can be contacted at [email protected] -IANS

I’d be happy to have Sunil Grover back on my show: Kapil Sharma

Soldier shoots himself dead in J&K