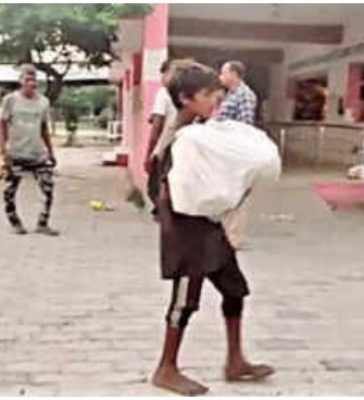 Baghpat (Uttar Pradesh): A video clip of a 10-year-old boy, carrying the body of his two-year-old brother in his arms has gone viral on social media, leading to public outrage.

The boy, Sagar Kumar, can be seen walking with the body, followed closely by his father. They had picked up the body from the post-mortem house in the hospital.

According to police, the two-year-old child, Kala Kumar, was crushed to death on Friday after his stepmother Sita allegedly threw him under a car near a bank in Baghpat, on the Delhi-Saharanpur highway, because he was crying incessantly.

Circle officer of Baghpat, Devendra Kumar Sharma, said, “Locals informed us, after which a case was registered against the woman under relevant sections of the IPC and she was arrested. The body of the boy was sent to the post-mortem house at the hospital.”

The body was handed over to his father, Praveen Kumar, who is a daily wage labourer in Shamli district, after the autopsy.

Praveen was accompanied by his relative Rampal and his son Sagar.

Rampal alleged that Praveen repeatedly requested a health official to provide a vehicle to carry the body. “However, they did not pay any heed to his request,” he said.