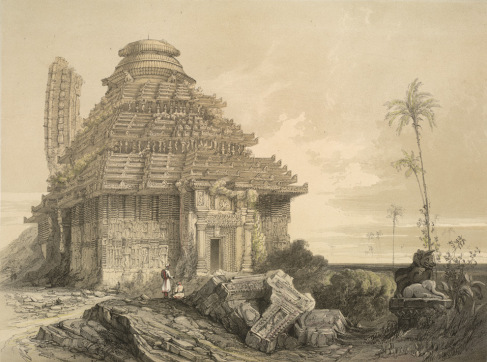 In the beginning of the 19th century, a number of artists had arrived from England to carve a niche for themselves and begin with a fresh start in British India. As they travelled through India, they were fascinated by her unusual tropical sceneries, stunning ancient monuments and people of varied castes, religions and occupations.

There were no cameras to capture their joyous moments. In the absence of photography, these foreigners hired Indian artists to paint their subjects of interest. These painters who were collectively known as artists of ‘company painting style’ used water colours and employed techniques that would appear of linear perspective and shading: techniques that had evolved in Renaissance Europe.

Some of these painters become enterprising and began to create sets of standard popular subjects that could be sold to tourists visiting the major attractions.

Odisha, especially, Bhubaneswar, Puri and Konark had become centres of attraction for tourists. Some enterprising artists had exploited the opportunity, though we still don’t know who they were and where they came from. But the images they had produced were nothing less than photographs. They not only showed monuments but also depicted people, their lifestyle, events like Rath Yatra at Puri and surrounding sceneries.

The paintings of Puri show the Car Festival with the great Jagannath Temple in the backdrop. Gajapati Maharaj is shown sitting on an elephant and accompanied by other elephants. The procession is quite different from now as the Gajapati today comes in a palki.

Another water colour image shows a rare painting of Konark, though it is of a later date. It was painted by Fergusson in 1847. Though Konark is shown in ruins, but an interesting aspect of this painting is–a portion of the main temple (which is completely lost now) was still standing.

Indeed the water colour images of early 19th century Odisha are rare treasures, thanks to the initiative of the British Library, which are now accessed to all having curiosity on Odisha’s 19th century past.