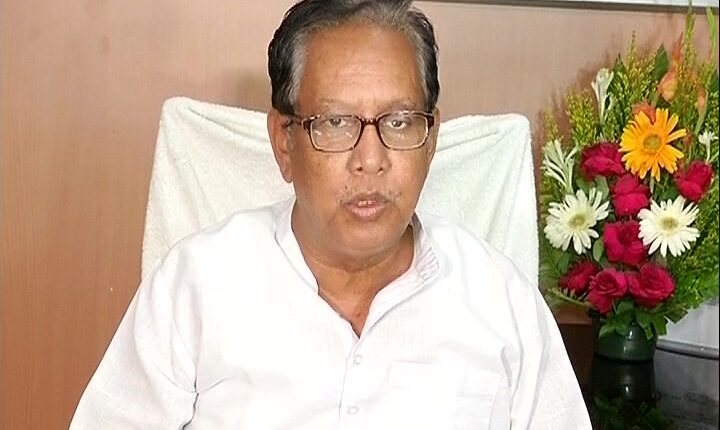 Bhubaneswar: Odisha Minister for Steel and Mines Prafulla Kumar Mallik today held discussions with different stakeholders of the mining and metal sector in a virtual programme organized by the Department of steel and mines, Government of Odisha and the Indian Chamber of Commerce (ICC).

The ‘national metal and mining e-summit 2021’ saw deliberations from different experts and players from the sector. The minister in his interaction with the stakeholders claimed that despite the pandemic in place, the initiatives taken by the state government ensured maintaining the pace of work in the sector despite challenges galore. 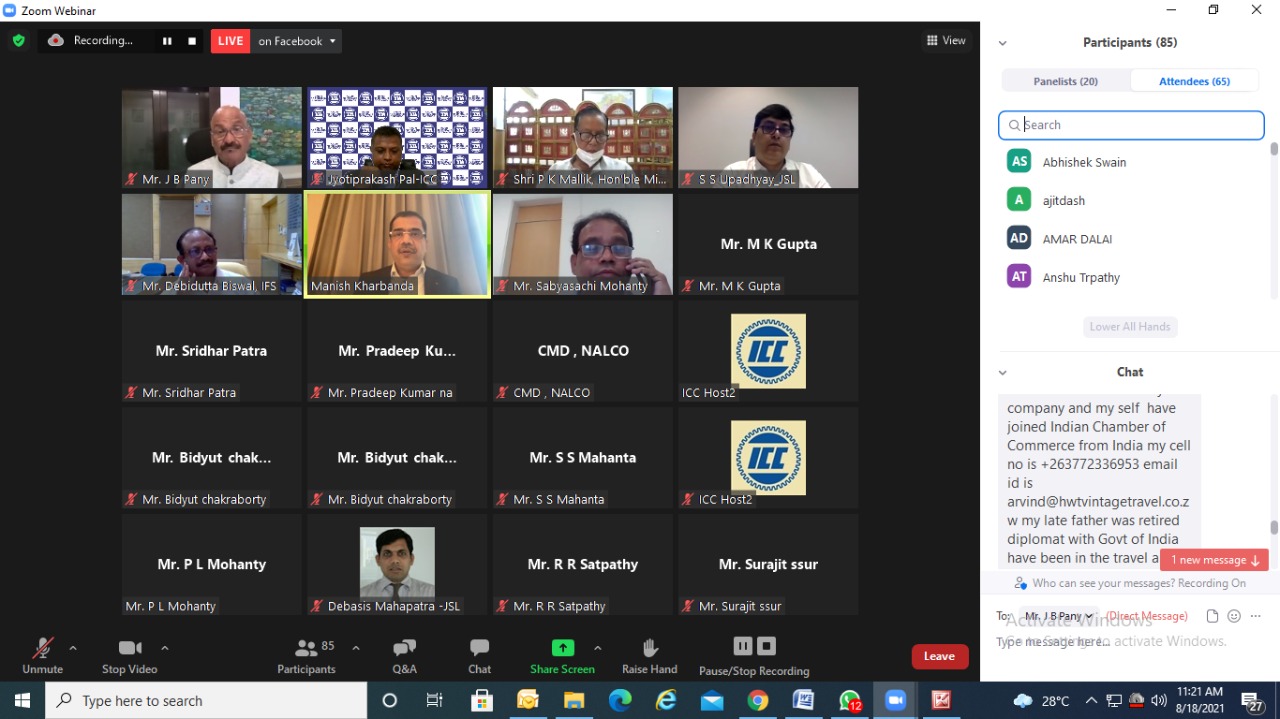 “Odisha is known in the country for its rich mineral resources. The sector however witnessed a minor effect during the initial phases of COVID 19 but the government initiatives helped to keep the sector on track. We were able to conduct the auctions of mines during the period. Meanwhile at the central level the MMDR Act saw some amendments which also made the works in the sector more conductive and user friendly,” the minister said.

Debidutta Biswal, State Mines Director claimed that the digitization of several mining related works in mining, permits and others helped the State in better managing the affairs despite the pandemic.

“Odisha was one of the few states in India which had the online mineral monitoring system. We also issued e-passes during the pandemic to ensure hassle free movement and business of the sector. 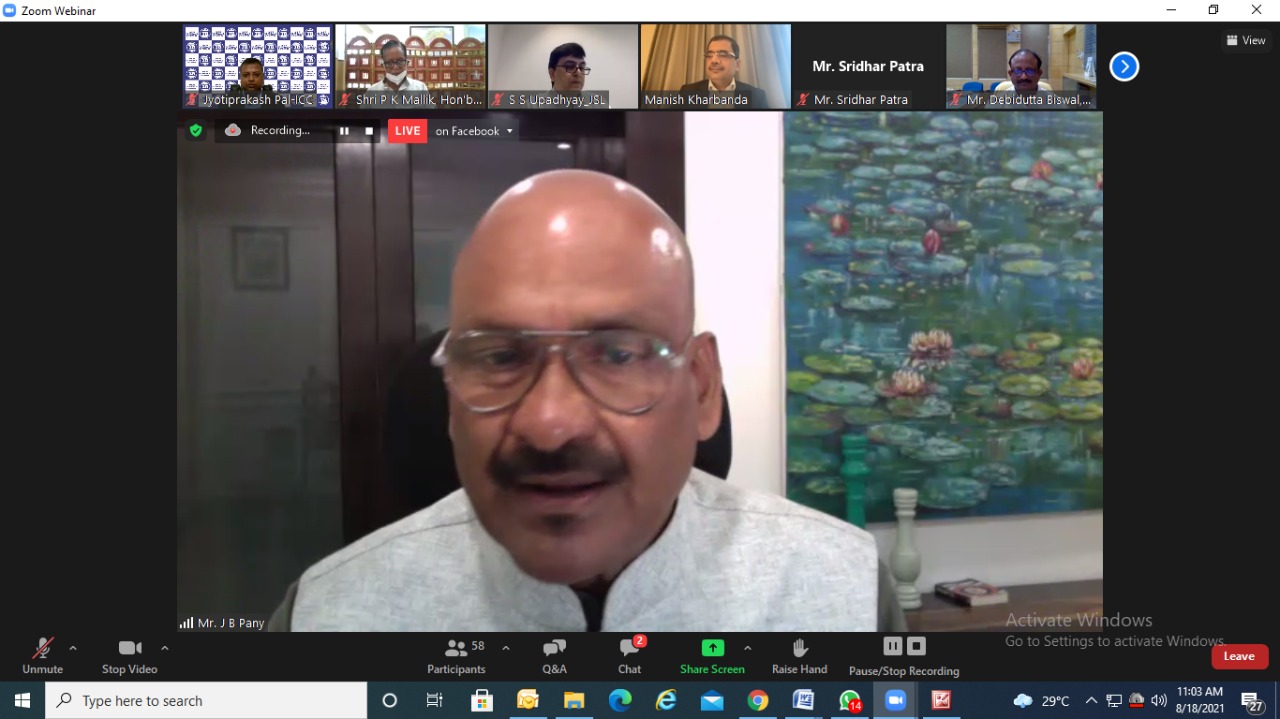 Granting of many online licenses to the sector also reduced human interface. Out of the 24 auctioned mines, production also started at 19 of these,” Biswal said.

The industry experts meanwhile also spoke in length on the resilience of the sector during COVID 19, state policies, the bottlenecks and deliberated on the future ahead.

J B Pany, Chairman , ICC Odisha State Council said, “India still stands to be a power house when it comes to mining and we believe that there is a significant scope for new mining capacities in iron ore bauxite and coal and opportunities for future discoveries of subsurface deposits. Also with India’s strong focus on Atmanirbhar Bharat and Make in India resulting in boost in manufacturing across a plethora of sectors is expected to boost the metals and mining sector.

On this background ICC organized the National Metal and Mining E-Summit 2021 to bring forward and discuss how the new wave of COVID has affected the mining sector and how the sector is acquainting itself to a new normal and preparing itself to face challenges from upcoming waves if any. The Indian Chamber Of Commerce (ICC) through its webinars has been actively involved in knowledge sharing regarding the metal and mining sector and different aspects of the business. This summit is an extension to the effort by the chamber to discuss the dynamics of the sector across the value chain of our economy.

Manish Kharbanda, Member, Core & Advisory Committee & Mentor, Steel & Mines Committee, ICC said, “Steel & Mines sector has immense potential to contribute to Odisha‟s development. In line with the vision of former CM of Odisha and legendary leader Biju Patnaik ji, 100 per cent of Odisha‟s raw materials should be utilized for Odisha based Industries. The state government should focus on the value addition of the mineral reserve in the State, which can generate five times more revenue than mining on a standalone basis. Because of the low availability of ore in the open market, many operational plants cannot utilize their total installed capacity. State Govt. may allot iron under Pre-emption Policy of the State for the survival of the State based industries aligned to the vision of the Hon‟ble CM and his legendary father Shri. Biju Patnaik. When about 58 per cent of the State based iron ore is allowed interstate export, the survival of the value addition industry and the associated economic growth is bound to slow down, which can have disastrous medium to long term consequences for the State.

S S Upadhyay, Convenor, Steel & Mines Committee of the ICC Odisha State Council, said that the meeting of the committee was its maiden meeting this year, which focussed on bringing major stakeholders of the industry under one roof. He also said that a mining conclave was also likely to be planned during the last months of 2021 in the State with the collaboration of the state government which could not be done last year due to the pandemic.

Sabyasachi Mohanty, Director – Technical (Operations), Odisha Mining Corporation Ltd, meanwhile said that the direct contribution of the mining sector had not been significant in the total GDP of the country although indirect contribution was although high.

Odisha: Shree Lingaraj Temple to reopen for devotees from Sept 1

Women, children beaten by Taliban as they try to reach Kabul airport