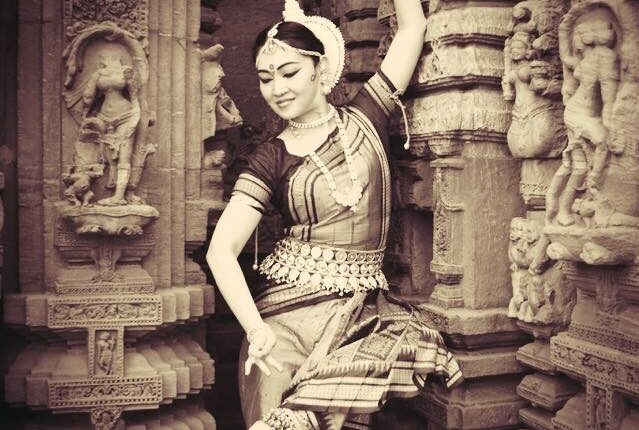 Masik Shivaratri May 2022 Date, Tithi, Puja Time; All dates for this year

Kimiko Yanagida combines passion for her art with academia. A veteran Odissi artiste, Yanagida trained with Guru Hare Krishna Behera for five years and with Guru Subash Chandra Swain for almost three decades. As a student she researched Dance Philosophy at National Nara Women’s University, and now teaches ‘Rhythmic Dance Expression,’ first at her alma mater and currently at Osaka Health and Welfare Junior College. She has held Odissi recitals at venerated venues such as the Ise Jingu Shrine and the Todaiji Temple. Devoted to her field, she holds precious her experiences of learning Odissi in India and actively promotes Indian culture in Japan.

Yanagida recounts three milestones that stand out in the journey of her life:

“My 5th grade teacher introduced me to a South African dance called ‘Pata Pata’. The dynamic rhythms of the accompanying song by Miriam Makeba, the energy of the Xhosa language that I had never before encountered, combined with pathos – a sadness hidden behind a bright singing voice touched me. I sensed for the first time how it must feel existing in a culture different from my own. It was only years later I realized the song was anti-apartheid – a glorious defiant refrain in the face of oppression. It was around this time too that I devoured biographies of people from around the world. Just as reading whetted my interest in different countries, dancing enabled me to ‘physically encounter’ unknown cultures. Music artists such as Nancy Sinatra and Sylvie Vartan enthralled me, and with the help of my teachers, I choreographed and danced to their music, over and again. I experienced the joyful exhilaration of dancing. This elementary school experience formed the integral bedrock that underpins my current dance activities. 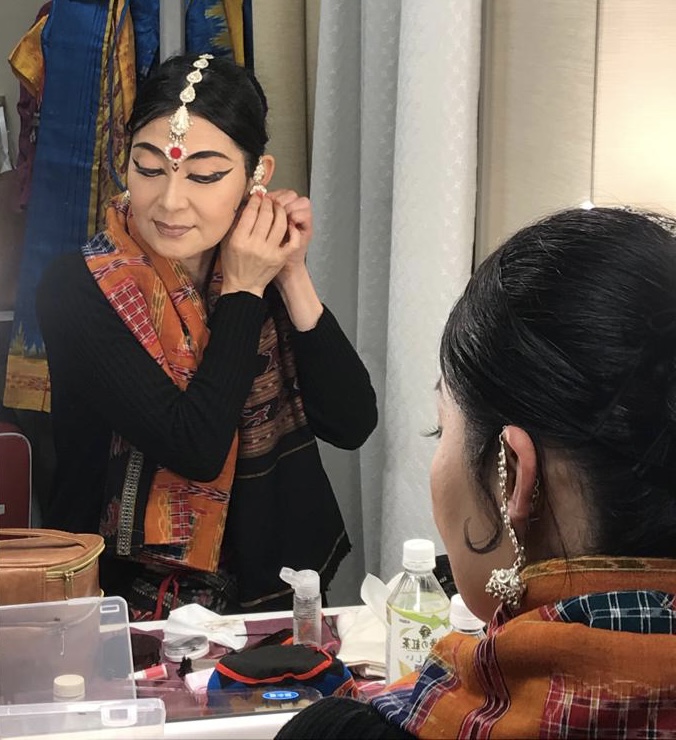 The second encounter that shaped my life was studying dance as an academic discipline. At the National Nara Women’s University, I learned that dance research is possible as an academic discipline. Rekindling my early years’ interest, I studied every physical expression in the world from a cultural viewpoint and wrote a dissertation. Dance research has given me a new perspective on dance. I was very lucky to be able to work on my dissertation with Professor Takane Hirai, a specialist in this field.

After graduating, I got to work for the Odisha government in India. Here, while living in Odisha, I first experienced Odissi. I was immediately charmed. Odissi is a sublime dance that encapsulates the spiritual culture of a people. From daily prayers of gratitude to pious elucidation of deep emotion, the range of physical expression in Odissi is amazing. Having learned classical ballet, I presumed I could master any dance move without difficulty, but in Odissi the rhythms of the upper and lower body are completely different. Initially confused by a method I had never experienced before, I soon grew to appreciate the beauty of Odissi’s unique elegant technique. Since it’s especially essential to place emotion into each movement, I enjoyed studying Hindu mythology and learning about the religious nuances in Odissi that make your movements meaningful.

My passion for this dance form continues…it’s almost like I am intoxicated by Odissi. I believe my mission is to convey the spirit of Odissi to young students in the field of education.”

Dance was always Sachiko Murakami’s creative release. Trained in ballet, she also studied jazz, modern dance and Balinese classical dance in her early twenties, searching for something that resonated with her. “I always enjoyed the world of dance. After training in Western style dances, I wanted to explore oriental forms of traditional dance and the more I searched, the more I realized the roots of most Eastern classical dance lay in India.” With this quest in mind, she attended an Odissi recital in Osaka. It was a transformative experience. “The graceful beauty of the dance and the sweet devotional undertone touched a chord in me.”

After completing her graduation in English Literature, Murakami began her training in Odissi in 1993 in Osaka with Saeko Hamada, a veteran Odissi dancer. Three years later, she moved to USA to deepen her study with Dr Ratna Roy, a close disciple of Adi Guru Pankaj Charan Das, doyen of the traditional Mahari style of Odissi.

Immersed in her learning, Murakami grew to love the nuances of abhinaya, the interpretative aspect of Odissi where the dancer conveys emotion not boldly, but rather subtly through the slant of the head, a glance of the eye or a gesture. This made her realize she needed to pursue the art in the land of its origin. She explains, “It’s one thing to study Odissi, but it is another thing completely to be where the dance was initially crafted and shaped…you understand more than just the form, you can begin to understand the emotional journey of the discipline.” In 2000, Murakami traveled to Odisha where at Orissa Dance Academy she trained with Guru Gangadhar Pradhan, Rojalin Mohapatra and Lingaraj Swain.

“In India, even the gods seem more human. There is expression and emotion everywhere I look and that’s what I observe and soak in. Just watching how people converse is fascinating, so I try to make it a point to travel to India at least once a year.” Embracing Indian culture with genuine attachment and respect, Murakami established The Odissi Dance Center in 2015, in her hometown Osaka – a collaborative academy from where she hopes to spread knowledge and awareness of Indian culture through Odissi.

Murakami gets reflective when asked about the future. “There is definitely an ease when you have a supportive network that allows you to just concentrate on your art. Over the years I have built my community of support, and I truly believe that if you work hard and persevere you always gain.” She smiles, quietly confident. “Sometimes the toughest times turn into your best memories.”

“Odissi, for me, is an embodiment of creative spirituality. It not only helps me connect deeply with myself, it has given me a tool to live life skillfully and interact with the world in a meaningful way. I have devoted my life to Odissi, it is my prayer to the creator.”

With a career spanning over three decades, Miki Nonaka is a reputed Odissi artiste who was instrumental in founding the India Arts Sangam in Kyoto in 2014. She has impacted and encouraged a generation of dancers interested in Indian classical arts.

Born and raised in Kyoto, Nonaka graduated from Kyoto Saga University of Arts majoring in Nihonga painting. Her work as an artist, creating textile designs at a dyeing studio, required her to sit still for long hours. Thinking she needed to inculcate some exercise into her daily routine, she chanced upon Vasant Mala Indian Dance Institute where she learnt yoga and some basics of Bharatnatyam for eight years.

Her first brush with Odissi took place in 1988 when she saw Guru Kelucharan Mohapatra’s recital in Tokyo. “I loved Guru Kelucharan’s effortlessly mesmerizing performance and particularly loved the melodious accompanying music. Odissi music is nuanced and almost melancholic, somewhat similar to traditional Japanese music.” A year later, when Nonaka and her husband decided to travel and live abroad for a while, she suggested they go to India. 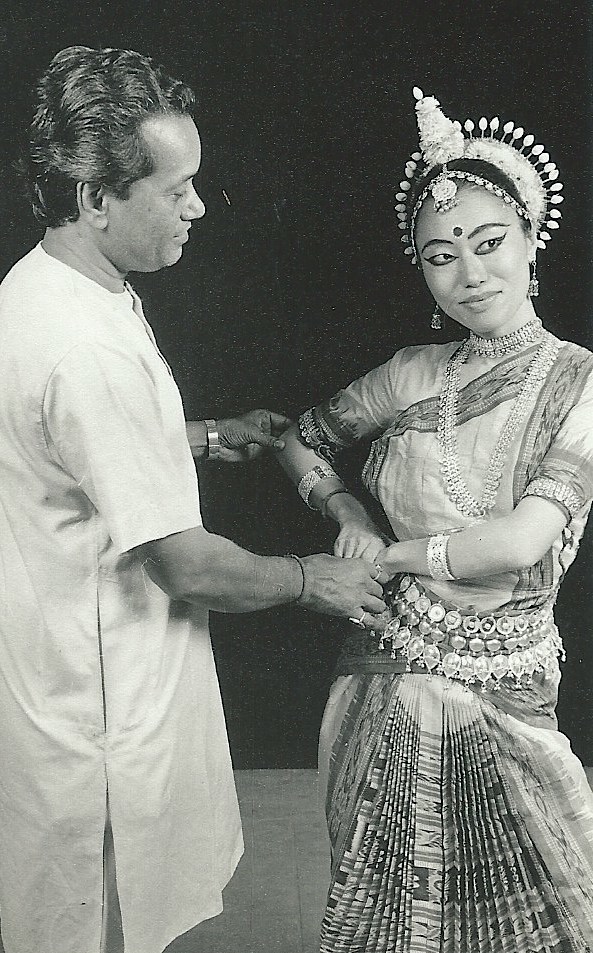 “It was the year 1990 and there was no such thing as researching online for information, so I wrote to the Sangeet Natak Academy, asking about the possibility of joining some dance classes, ” recalls Miki Nonaka. “This correspondence proved to be a turning point for me because the person who replied to my initial query was Bandana Srinivasan, an administrative officer at the Academy, who became a lifelong friend. Her kind and informative response reassured me and when she offered to arrange private lessons with an Odissi guru, I agreed with confidence.”

So it happened that from September 1990, Nonaka started training with Guru Ramani Ranjan Jena at Triveni Kala Sangam in New Delhi. “Guruji was a dynamic dancer and I enjoyed my time with him. Before my lessons started, I had thought that Odissi would be less demanding on the muscles than Bhartnatyam since movements in Odissi are circular and smooth… I soon realized that it was just the opposite. The poetic delicacy of Odissi is layered with strength. The clean movements require grace and fluidity that comes with hard practice.” Even after her return to Japan, Nonaka made regular trips to India to continue training with Guru Ramani Ranjan Jena until his passing in 2016.

While in India, Nonaka received glowing reviews for her performance at the Videshi Kalakar Utsav in 1991. “This was a very heartening experience for me. I had been learning Odissi for less than a year, but I was encouraged by Guruji and my peers to participate. I was the first Japanese artiste to perform at this annual event.” The show was organized by Sharon Lowen, an established Odissi artiste who put the event together with the aim of erasing divisive beliefs that non-Indian practitioners of Indian classical arts could not be artistes in their own right. She says contemplatively, “Although I didn’t realize it then, this line of thought is something I’ve dealt with repeatedly, not only in India but even here in Japan. But now, I have come to a point where all I want is to spread the message of my Guruji. I can still hear his words, as I heard them for the first time and I wish to teach his method and style to my students.”

*The writer is a freelance contributor and long-term resident of Kobe, Japan