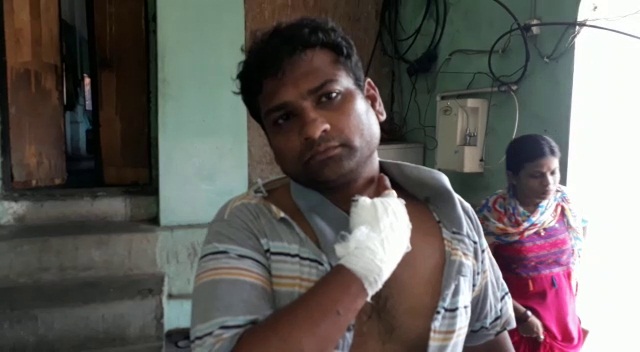 Puri: A devotee from Maharashtra was allegedly assaulted by the servitors and his gold pendent was snatched inside the Jagannath temple over dakshina.

The victim identified as Chetan G Amolkar, a resident of Thane in Maharashtra, was beaten up and injured for not paying huge amount to the servitors as demanded by them.

He lodged a complaint with Singhadwar police here today alleging the servitors of manhandling him, misbehaving with him, assaulting him and snatching his gold pendent on premises of Jagannath temple premises in Puri.

According to reports, Chetan along with his family had visited Srimandir for darshan of Lord Jagannath. The servitors demanded huge amount from him for offering prayer to deities at temple. After he did not pay them much as dakshina, the servitors started assaulting him inside the temple campus and tried to snatch his gold chain. When he protested, he was allegedly beaten up tearing his clothes.

He sustained injury on his right hand while trying to save his gold chain. Although, he managed to get his gold chain back, the pendent attached to it was taken away by one of the servitors during the incident.

Even the servitors abused and beat his wife for paying them less amount of money.

“The pundits are getting salary for worshipping the deities and their service at the shrine. But, they are demanding huge amount from the devotees in name of darshan of the deities. It depends on us how much we will pay, but they are forcing us. When we refuse to pay the money they demand, we face such situation,” said Chetan, who sustained injuries on hand and neck.

A case has been registered for probe into the incident following complaint lodged by the victim at the police station. He alleged that he sustained injury during argument and clash with the servitors who tried to snatch his gold chain. The investigation is in progress, said Gokul Ranjan Das, Singhadwar IIC.

Earlier, several such incidents were reported about misbehaviour of servitors towards devotees on premises of the centuries old shrine in Puri. Several devotees have complained against them for their irrational behaviour. However, no exemplary action has been taken by police or by the temple administration, against the erring servitors.

Odisha to close 18 jails. Here’s why