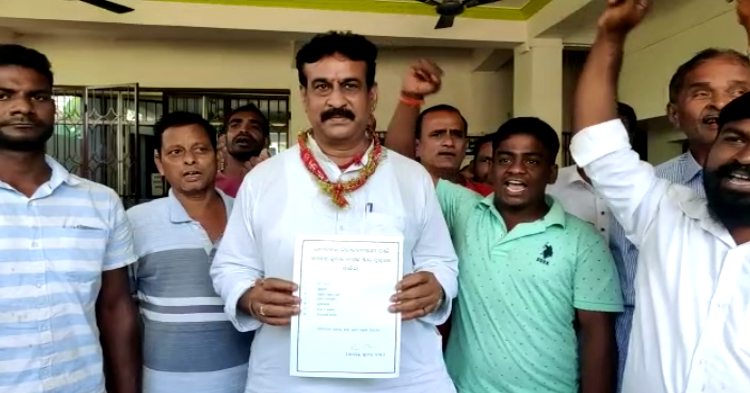 Bhadrak: Rebel Biju Janata Dal (BJD) leader Rajendra (Raju) Das, who is all set to contest Dhamnagar bypoll as an Independent candidate, today released a list of his star campaigners for the ensuing bye-election in Bhadrak district.

While the ruling BJD and opposition parties Congress and BJP have come up with star campaigners’ lists including prominent and senior leaders of their respective parties, the Independent candidate has nominated his parents, senior members of his family, elderly persons, poor and downtrodden, farmers, youth and public of the Dhamnagar Assembly Constituency as his star campaigners for the bypoll scheduled to be held on November 3. 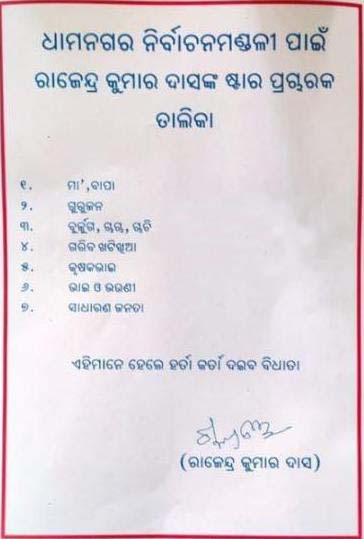 Although the bypoll is crucial for the BJD, BJP and Congress to assess public support ahead of 2024 general elections, BJD’s rebel leader Raju Das’ nomination for the bypoll may create more trouble for the ruling party.

Sources said that with a purpose to prove ‘All’s well’ in BJD, Jajpur MLA Pranab Prakash Das, who is the party’s Organisational General Secretary, along with other members of the party had visited house rebel leader’s residence in Bhdarak yesterday to persuade him to withdraw his nomination in the upcoming bypoll. However, the talks between two leaders failed and Das remained stick to his decision to contest the bypoll as the Independent candidate.

Since today is the last day for withdrawal of candidature for the bypoll, Das today made it clear that he will not pull out of the race.

“There’s no question of withdrawal of nomination. People of Dhamnagar are with me and I am with them,” he told reporters today.

With rejection of nomination of Independent candidate Subhanarayan Sethi, total five candidates including two Independent candidates are in the fray for Dhamnagar bypoll. While BJD has nominated Abanti Das as its candidate for the bypoll, BJP’s Suryabanshi Suraj Sthitaprajna and Congress’ Baba Harekrushna Sethi will contest from the assembly seat.