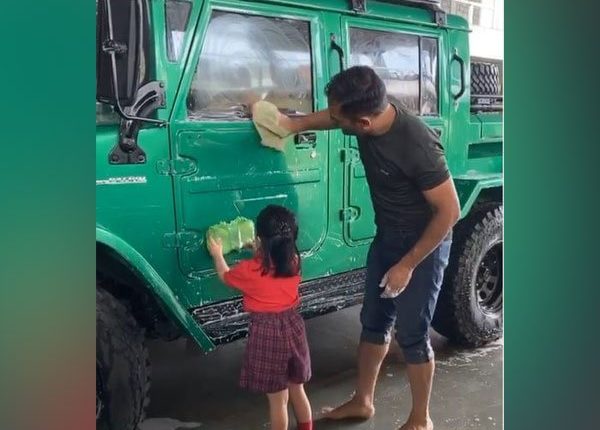 Ranchi: A lot is being spoken about the future plans of former India skipper M.S. Dhoni ever since the culmination of 2019 World Cup in England and Wales. However, Ranchi’s favourite son is not at all withered about all the speculations and is currently enjoying the free time with his family.

On Thursday, Dhoni shared a video along with daughter Ziva in which the two can be seen washing his new jeep — Nissan Jonga, which the stumper recently bought from Punjab.

The 38-year-old’s love for cars and bikes isn’t new and recently he added another collection in his garage — the Jonga, which was being used by the Indian Army. The wicketkeeper-batsman had used the same vehicle to visit the JSCA Stadium in the state capital when India defeated South Africa by an innings and 202 runs in the third and final Test of the series. After the win, Dhoni was seen spending some time with Shahbaz Nadeem and his other teammates in the Indian dressing room.

Earlier on Wednesday, newly appointed BCCI President Sourav Ganguly made it clear that Dhoni will be respected.

“I don’t know what’s in his mind. India is very proud to have M.S. Dhoni. Till I am around everybody will be respected. Dhoni’s achievements make India proud,” Ganguly said while addressing a press conference in Mumbai.

Dhoni, however, has kept everyone in suspense regarding his retirement from the limited-overs format.

Odisha: Four held for extorting money by posing as Maoists in Koraput

Holiday declared for schools in ten Odisha districts for tomorrow

Wear our cricket kit and walk into the field: Virat Kohli loses cool after loss…

Watch: Babar Azam’s father breaks down after Pakistan’s victory over…