Did you know there exist a replica of Vaishno Devi temple in Odisha! 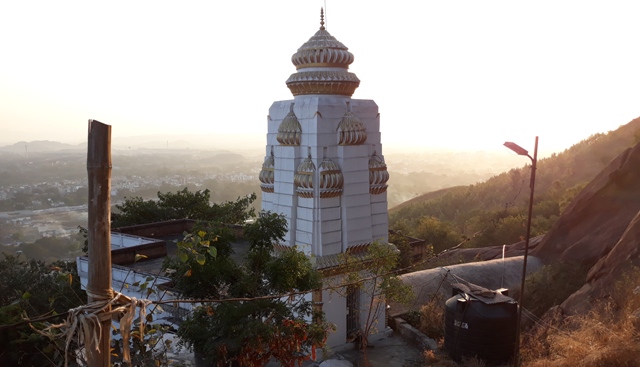 Bhubaneswar: In the lap of Durgapur hills, covered with deciduous trees and their mellow yellow leaves, in Odisha’s Rourkela is Vaishno Devi temple, a replica of the famous pilgrimage site at Katra in Jammu and Kashmir.

Around 300 winding stairs carry devotees to the main temple as they soak in the surrounding green.

A cave beckons you on reaching the hilltop and leads you to the Vaishno Devi ‘pind’.

The ‘pind’ is beautifully set-up similar to that at Katra where priests sit all the while and you can peacefully follow the rituals.

Priest A K Mishra who has been serving at the temple since 2005, said that the temple was constructed with lots of donations and devotion. “The temple was opened to the public in 2003 which was when it was officially established. However, not many are aware that such a temple exists on this hill,” he said.

There’s also an idol of Vaishno Devi in the adjoining balcony that gives you a breathtaking view of the city with steel plant far away and the settlements below.

A few steps up is the Bhairavnath temple as it is said Vaishno Devi is incomplete without Him.

Like temples at all places, this too has an interesting story. In 1996, Raju Chandak of Rourkela had a dream of caves up on Durgapur hills with Vaishno Devi pind. This propelled him to explore the hills to see if it was merely a dream or a message. He climbed up to find a small opening, almost like a cave and he could only gasp in awe. He and 13 others then came together to construct a temple there.

The peaceful ambience gives you a feeling of queer satiety and calmness. Every morning and evening, ‘aartis’ is done that fills one with the feeling of purity and spirituality.

Every Navratri, chants and cheers reverberates through the temple. Hundreds of devotees flock to the temple and stay put on its premises during the nine-day festival.

On February 6 every year, the day when the temple was established, a ‘mahotsav’ is organized and denizens celebrate it with a lot of enthusiasm. The best time to visit the temple is winter.

This apart, the Steel City has several lively places for tired souls including Indira Gandhi Park and Hanuman Vatika, a garden that houses Odisha’s second tallest idol of Hanuman of 75 feet.

As dusk grows, the city is abuzz with activities with people spilling onto the roads and food stalls flocked by younger and older ones.

Man electrocuted after coming in contact with live wire in Odisha